Through her participation in a youth program at the US Holocaust Memorial Museum, Navila Rashid says she became a better Muslim. Rashid believes her encounters at the Museum gave her courage to continue on her own spiritual journey and compassion for people of other faiths. 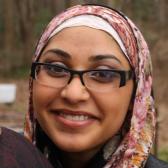 Through her participation in a youth program at the US Holocaust Memorial Museum, Navila Rashid says she became a better Muslim. Rashid believes her encounters at the Museum gave her courage to continue on her own spiritual journey and compassion for people of other faiths.

NAVILA RASHID:
Just because I'm Muslim doesn't mean I can't connect with a Jew. Because we all know that Judaism, Christianity, and Islam are of the Abrahamic faith. I mean, yeah, there is a difference. But I find that I'm the kind of person that likes to look for indirect relationships.

ALEISA FISHMAN:
Through her participation in a youth program at the United States Holocaust Memorial Museum, Navila Rashid says she became a better Muslim. A high school student who suffered religious discrimination, Rashid believes her encounters at the Museum gave her courage to continue on her own spiritual journey and compassion for people of other faiths.

Welcome to Voices on Antisemitism, a podcast series from the United States Holocaust Memorial Museum made possible by generous support from the Oliver and Elizabeth Stanton Foundation. I'm your host, Aleisa Fishman. Every other week, we invite a guest to reflect about the many ways that antisemitism and hatred influence our world today. From Washington, D.C., here’s Navila Rashid.

NAVILA RASHID:
I am a Muslim, and I do wear the head scarf. And it was actually something recent I had taken up. So the Museum helped shape my connection with myself, my faith and my environment. It wouldn't be incorrect to say that I kind of found myself, quote-unquote, because I was going through like a spiritual journey as well. Because when I began this program, one of the activities we did was to talk about specific moments where we were discriminated against. And I decided to talk about the moments that led up to me wearing the scarf—head scarf, hijab—and after wearing it what happened to me. I remember telling them that I saw a big difference between how people behaved with me before I wore hijab and after I wore hijab. Like when I would walk into D.C., how security guards would treat me, versus, when I didn't have a head scarf and I could just walk around and pretend to be just like other tourists, and to wear hijab and understand that hey, people can be cruel, but I'm strong enough to transcend that and just continue my life. I felt like it took a lot of courage on my part. But also, I felt like it was courageous that everyone was able to hear it and understand it, because a lot of people don't understand what I go through. But they understood, the people in the room, my fellow students and friends, they understood.

The Museum had a great impact on me becoming a better Muslim, in terms of just getting rid of ignorance and hatred. Because that is one of the basic things about the Museum and one of the messages. Islam in essence means peace; which a lot of people don't know. Because you know, with the media, with terrorism and just, you know, suicide bombers and whatnot, you don't get a lot of peace from just hearing the word Islam. So for me, I felt like a better Muslim because I was able to understand the concept of transcending ignorance and insensitivity, and to be able to bring that together with my faith, and to realize, you know, my faith has the same principles…the same basic principles. A lot of people, you know, are questioning, "Well, you know, it must've been confusing. Like, how do you try to learn your faith while trying to understand, you know, the Jewish faith?" But I think I can encounter everything that's around me by finding some sort of interconnectedness.

It's very important to have a diverse group of people come together and talk about anything really: politics, entertainment, whatever, what have you. You begin to have people realize that they're not that different from each other. And if you have a sense of similarity, maybe people will let down this wall that they've built up for themselves, or their community, or for their family. I think that's a very important message to convey.