Mo Asumang is a German filmmaker who confronts racism and antisemitism in the most literal way: she talks with people, face to face. She attends nationalist parades and anti-immigration rallies in Germany. She meets with white supremacists in the American South. She walks up to strangers with her camera crew and just begins a conversation. 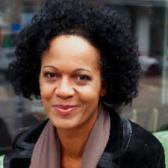 Mo Asumang is a German filmmaker who confronts racism and antisemitism in the most literal way: she talks with people, face to face. She attends nationalist parades and anti-immigration rallies in Germany. She meets with white supremacists in the American South. She walks up to strangers with her camera crew and just begins a conversation.

MO ASUMANG:
I set out to find out about how racism works, and I go out and meet racists and neo-Nazis and the Ku Klux Klan, and I talk to these people.

ALEISA FISHMAN:
Mo Asumang is a German filmmaker who confronts racism and antisemitism in the most literal way: she talks with people, face to face. She attends nationalist parades and anti-immigration rallies in Germany. She meets with white supremacists in the American South. She walks up to strangers with her camera crew and just begins a conversation.

Welcome to Voices on Antisemitism, a podcast series from the United States Holocaust Memorial Museum made possible by generous support from the Elizabeth and Oliver Stanton Foundation. I’m Aleisa Fishman. Every month, we invite a guest to reflect about the many ways that antisemitism and hatred influence our world today.

We begin with a clip from Mo Asumang’s film The Aryans, where she talks with a KKK member at a nighttime rally in Virginia.

ALEISA FISHMAN:
Growing up as a mixed-race child in Germany, Asumang has been confronted with racism for as long as she can remember.

MO ASUMANG:
My father, he came from Ghana in the '60s. My father was a student in Germany in the city of Kassel, and my mother, she lived there, and they met in the tram. And, yes, they came together. And I must say that my childhood wasn't really very much of a family childhood, because when I was five weeks old, they gave me into an orphanage, so I was staying in that orphanage for one year. And after that one year, I went to foster parents, and after that, I went to live with my grandmother. And when I was two years old, they have been throwing us out of the house where my mother and my grandmother lived for many, many years, because of the color of my father and because of my color. So, all these things, yeah, influenced my life very much.

ALEISA FISHMAN:
Asumang was one of the first women of color to become a television presenter in Germany, and she became a target of a neo-Nazi rock band.

MO ASUMANG:
They had this sentence, "This bullet is for you, Mo Asumang." That's what they sang. So this song was in the neo-Nazi community, and they sent it to each other via e-mail or however. And the song really forced me to look at this topic very seriously.

ALEISA FISHMAN:
It was a public death threat, but it emboldened Asumang. And became the catalyst for the first of three documentary films she would make about race and identity. Asumang believes film has real power to encourage change.

MO ASUMANG:
Well, first of all, I am creating the picture. The picture: on one side, there is a racist or neo-Nazi or Ku Klux Klan, and on the other side, there's me, the Black person—could be also a Jewish person or could be Muslim—but I’m creating the picture: we can talk. If you never see that it works, then you cannot even imagine that we can make a change. I mean through a movie, it's not very much, but it's a beginning.

ALEISA FISHMAN:
Asumang concedes that her tactics for confronting hatred so directly are not for everyone. But she is inspired by the incredible change she witnessed in her own family, when her grandmother—a former Nazi party member, who worked with the SS—came face to face with a black grandchild.

MO ASUMANG:
My mother, she told me that when she told my grandmother there's a baby going to be born and the baby's going to be black, that my grandmother said she wanted to jump in front of the tram and kill herself. But then when she saw me, even though she was at the SS, when she saw me, there was a emotional moment, and this emotional moment was human. There was a baby, and she was a woman. She felt like a mother, so she took care of me. So I think also through this in my personal history, I am really very, very sure that every person, even if the person has been to the SS, can change, but we have to bring it to a personal level. Yeah, my grandmother, through her story and my story, she really gave me a good kick in that direction. "This will work. Go ahead, talk to people, and that will work."