During his career, Kahn has produced The Merchant of Venice three times. It is among the most popular and the most contentious of Shakespeare's plays, with ever-evolving relevance for modern audiences. 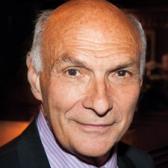 During his career, Kahn has produced The Merchant of Venice three times. It is among the most popular and the most contentious of Shakespeare's plays, with ever-evolving relevance for modern audiences.

MICHAEL KAHN:
I do not believe that The Merchant of Venice is an antisemitic play. I believe it is a play that shows antisemitism at work, and also how antisemitism makes people feel and behave in ways that are destructive.

ALEISA FISHMAN:
Michael Kahn is the Artistic Director of the Shakespeare Theatre Company in Washington DC. In his career, Kahn has produced The Merchant of Venice three times. It is among the most popular and the most contentious of Shakespeare's plays, with ever-evolving relevance for modern audiences.

Welcome to Voices on Antisemitism, a podcast series from the United States Holocaust Memorial Museum made possible by generous support from the Elizabeth and Oliver Stanton Foundation. I'm Aleisa Fishman. Every month, we invite a guest to reflect about the many ways that antisemitism and hatred influence our world today. Celebrating his 25th year with the Shakespeare Theatre Company, here's Michael Kahn.

MICHAEL KAHN:
The Merchant of Venice is perhaps one of Shakespeare's most controversial plays in terms of the response of an audience, and of course, that is because of Shylock, the character of Shylock, and has become obviously infinitely more controversial because of the Holocaust. The play is really a mixture of two stories that finally come together in the famous trial scene: the story about a Jewish moneylender who gives money to a Christian and then the Christian loses the money and there's a trial, and a story of a rich woman and her suitors.

In Shakespeare's time, there was of course antisemitism. And Shakespeare is writing in a sense about Elizabethan England and coming out of the theatrical traditions of his time. Before Shakespeare—the little we know about how Jews were portrayed on the stage—they were portrayed as comic villains. They were dressed in terrible red wigs; they had big noses; they were simply representatives of greed and evil. Now Shakespeare comes along and does something very different. He still has Shylock in a kind of villain role, but he humanizes Shylock by explaining that Shylock, very clearly in the play from very early on, is treated by the Christians of his world as not a human. They call him "dog"; they spit at him; they call him "cur." And the two things that Shylock has for his life, well three things, are his daughter, his religion, and the money that he's earned. And those things, through the play, are taken away from him.

There is no way to do this play without huge sympathy for Shylock. Why I think it became very controversial was because obviously the portrayal of antisemitism disturbed people. And I could understand that. After the Holocaust, of course, just to even bring up antisemitism or to let a Jewish character have traits that were not wonderful, you know—the same thing happened in the black community during the Black-Power period when there could be no complicated portrayal of an African American, they had to be just very good and saint-like. But Shakespeare has never made a character all-good or all-bad, ever. You can't have an antisemitic play when you have the speech "Hath not a Jew eyes, hath not a Jews ears? If you prick us, do we not bleed?"

But it's not a pro-Jewish play, which is what I think people think it should be when they object to it. No, it's not. It's a play about everybody caught up in this terrible cycle of money and treating each other as a commodity. And Shylock is part of that world. Shylock is not a saint; Shylock is a moneylender; he lives in a world about money and money is what you trade and money is how you treat people. So I think it's a critique of the entire society of the play. But in the history of literature about Jews, Shakespeare has made a Jew a human being in a somewhat inhuman society.

Showing antisemitism is not the same as condoning antisemitism. And Shylock behaves the way he does as a result of antisemitism. Why should people lie down on the street and not fight back when they are being hurt, when they are being discriminated? Unless you fight back, discrimination will last forever. So Shylock fights back in the only way he can. I find that admirable. But I think it's about a lot of prejudices. Obviously prejudice against Jews, prejudice about homosexuals—because Antonio is clearly in love with Bassanio and hides it and they make fun of it when he's not there. And then Portia makes fun of Blacks. So for me, the play deals with prejudice on many levels.

I have always felt and still feel that theater—live theater especially—has a role in helping change perceptions because you are present at something happening live in front of you, and you are part of it. And you have to see things that perhaps you have never seen before, or people behaving in ways that you have not understood, trying to explain them. For instance in this play, I don't think you could see a production of The Merchant of Venice without being embarrassed about prejudice and question whether you have any yourself. Art does change lives in that way, which is one of the perks for me of doing these plays in Washington, because most of these plays are about power, about politics, about relationships with different groups of people, and people come who are involved in that and see that and I think they have to have a dialogue with the play and themselves when they go home about their own feelings. And hopefully sometimes their feelings have changed.