Music afforded Martin Goldsmith's parents some measure of shelter in Nazi Germany. For a brief period, they could practice their art and perform for other Jews under the protection of an all-Jewish orchestra, set up by the Nazis. 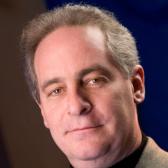 Music afforded Martin Goldsmith's parents some measure of shelter in Nazi Germany. For a brief period, they could practice their art and perform for other Jews under the protection of an all-Jewish orchestra, set up by the Nazis.

MARTIN GOLDSMITH:
There is nothing more optimistic than artists maintaining in the face of the most difficult circumstances. The ability of artists to persevere is nothing short of inspirational.

ALEISA FISHMAN:
In his book, The Inextinguishable Symphony, Martin Goldsmith recalls how music afforded his parents some measure of shelter in Nazi Germany. For a brief period, the young flutist and violinist practiced their art and performed for other Jews under the protection of an all-Jewish orchestra, set up by the Nazis. In gathering the details for his book, Goldsmith grew to appreciate the variety of ways Jews were able to maintain identity in the face of antisemitism.

Welcome to Voices on Antisemitism, a podcast series from the United States Holocaust Memorial Museum made possible by generous support from the Oliver and Elizabeth Stanton Foundation. I'm your host, Aleisa Fishman. Every other week, we invite a guest to reflect about the many ways that antisemitism and hatred influence our world today. Here's director of classical music for XM Radio, Martin Goldsmith.

MARTIN GOLDSMITH:
My mother was the daughter of a violinist who ran his own music conservatory in the German city of Düsseldorf. So she became a musician quite early on. My father, on the other hand, was the son of a man who ran a woman's clothing store in the German city of Oldenburg. And he wasn't sure about the path his life would take until he was well into his teens, when he began to play the flute. Both of their paths joined the very fascinating organization called the Jüdische Kulturbund, the Jewish Cultural Association. It was set up by the Nazis to essentially be a propaganda tool. They were able to say to the rest of the world: "Look the Jews of Germany have their own opera company, their own theater company, their own orchestra. Obviously we're treating them just fine." So the Kulturbund was important to the Nazis as a propaganda tool, but it was also very important to the artists who were employed by the Kulturbund. They were not only able to express themselves artistically, but they were among the very few protected Jews in Nazi Germany.

The director of the Kulturbund, a man by the name of Kurt Singer, tried to discourage artists from emigrating to other parts of the world by saying, "We are building the great Jewish theater, the great Jewish orchestra here in Germany. Why would you want to go anywhere else?" He naively believed that the Nazis would be moved somehow by the great achievements of the Kulturbund. And then, he was obviously proven wrong, he died in Theresienstadt in January of 1944.

My parents made it to this country in 1941, quite literally just in time, because less than three months after that the Nazis revived the medieval practice of forcing the Jews of Germany to wear the yellow star. And then the Kulturbund was dissolved by the Nazis—it was no longer of use to them as a propaganda outfit. And all of the members of the Kulturbund who had not yet managed to leave Germany were sent to the camps. So my parents were very fortunate to leave Germany with less than three months to spare.

My mother continued to be a musician for the rest of her life. I remember her quartet rehearsing all of the Beethoven quartets. And that's actually among my most cherished memories—being put to bed and then hearing down the hall the quartet rehearsing Beethoven, or Schubert, or the Ravel quartet. My father, after they came to this country, gave up the flute and took on the job of selling furniture at a department store. But I don't think it's an exaggeration at all to say that music, quite literally, saved my parents lives.

The Holocaust is so often presented as this immense tapestry, with six million fatalities. And I think that if you get up close and look at some of the individual pieces and the story of my parents and what happened to them and what happened to their families—when you learn the details, perhaps it becomes a bit more comprehensible to understand the immensity of the Holocaust.