While she was serving as US Secretary of State, Madeleine K. Albright, who had been raised as a Catholic, learned of Jewish ancestry in her family. Listen as Albright discusses how this knowledge influenced her. 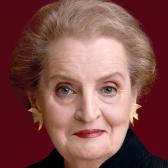 While she was serving as US Secretary of State, Madeleine K. Albright, who had been raised as a Catholic, learned of Jewish ancestry in her family. Listen as Albright discusses how this knowledge influenced her.

MADELINE K. ALBRIGHT:
I think that the problem of antisemitism has been, unfortunately, with us for centuries. And, it always is something that has to be looked at carefully, pushed back on. But it is part of something else, also, which is, just a general lack of tolerance, and a sense of discrimination and, to some extent, phobias. And, I think that we are seeing throughout the world at this point, a lack of understanding of other people's beliefs or respect for them.

DANIEL GREENE:
In 1997, Secretary of State Madeleine Albright visited the Pinkas Synagogue in Prague. There, listed among the more than 77,000 Czech and Slovak Jews who perished in the Holocaust, Albright found the names of her grandparents, Arnost and Olga Korbel. Just months before, Albright, who was raised a Catholic, had learned of her Jewish ancestry. The details of her family history came to light under intense public scrutiny. And this connection to the Holocaust had a lasting influence on Albright as a person and a diplomat.

Welcome to Voices on Antisemitism, a free podcast series of the United States Holocaust Memorial Museum. I'm Daniel Greene. Every other week, we invite a guest to reflect about the many ways that antisemitism and hatred influence our world today. Here's former US Secretary of State Madeleine Albright.

MADELINE K. ALBRIGHT:
I had always known that the Holocaust had existed. I mean I obviously understood that. I just didn’t know that it applied to my family personally.

When I became UN ambassador, there were stories about me, some television profiles, and all of a sudden I was a visible person. And, I started getting mail from people, mostly people that were writing me letters and saying, "I'm your relative, send money," or "I need a visa," or something like that. Then there were some letters that would say, "I know something about your family," and the facts would be all wrong—that my mother was born in some place where she wasn't, or that somebody had gone to high school with my father in 1916, when he would have been seven years old, or things like that, that just didn't make sense. Then, in November 1996, I got a letter from somebody where the facts were all there. They had my mother's maiden name, my, the village where my father was born, a whole series of things. I then decided that, while I was with all my children over the holidays, that I really needed to talk to them about it, and I said, “You know, I have this letter, and I'm beginning to have reason to believe that my parents were Jewish, and you need to know this.”

I was very fascinated to find out I was Jewish. I already had so many int—my background is so interesting, and I think that added just to the richness of being part of a very fascinating and proud history. But the Holocaust information was just devastating.

I first went to the Pinkas Synagogue, followed by the press. It was really, it's even, to this day, very hard to describe, to actually see the names there. And, my only real thought was of incredible gratitude to my parents for having taken me away from that.

You know, I'm often asked how this affected my policy, and the most immediate place where ethnic cleansing was taking place was in Bosnia and Kosovo. And, so there are a lot of people who have properly deduced that one of the reasons that I got so involved in that was because I thought it was wrong, and people should not be ethnically cleansed for their racial roots or their religion. So, I do think it's very important in diplomacy to make that very clear. Just as now it's absolutely essential to speak out about what's happening in Darfur, and why also we have to speak out about if people are being killed in Iraq because they're either Sunni or Shia. And I think that it is a responsibility of those of us that have the privilege of living in free societies to speak out and to use the various channels in a democratic society to speak out.

Globalization is definitely the event of our times, and it's, there are many, many good aspects to it. But there also is a counter-trend to globalization, and that is the need for people to know what group they belong to, whether it's their national group, or religious group, or the location where they live. And I think it's very good to have pride in who you are, but the challenge of our time is how not to have pride in one's own group change into hatred of another one.