In 2002, as president of Harvard University, Lawrence Summers publicly expressed concern about resurgent antisemitism. Listen to Summers explain why he spoke out. 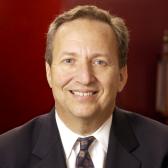 In 2002, as president of Harvard University, Lawrence Summers publicly expressed concern about resurgent antisemitism. Listen to Summers explain why he spoke out.

LAWRENCE SUMMERS:
I spoke out in 2002 because I was concerned about a rising tide of anti-Israeli, and possibly even antisemitic, sentiment on university campuses around the world.

DANIEL GREENE:
Lawrence Summers says he has not directly experienced antisemitism--not as a young boy in Philadelphia, a student at MIT and Harvard, or in his posts as Chief Economist at the World Bank or Secretary of the Treasury Department.

But in 2002, while serving as President of Harvard University, Summers publicly expressed his concern over a rise in antisemitism within academic communities and around the world. He addressed in particular movements toward boycotting Israeli scholars and businesses, and his comments ignited an ongoing debate about the distinctions between antisemitism and criticism of Israel.

Welcome to Voices on Antisemitism, a free podcast series of the United States Holocaust Memorial Museum. I'm Daniel Greene. Every other week, we invite a guest to reflect about the many ways that antisemitism and hatred influence our world today. Here's Harvard economics professor Lawrence Summers.

LAWRENCE SUMMERS:
I found it shocking and deeply troubling that a substantial group of faculty members at major universities would propose seriously, and indeed seek to pressure, for universities like Harvard to sell, to divest, any stock, any company that did any business with Israel. It seemed to me that such a boycott that singled out Israel was profoundly misguided. And so I raised the question of whether this action, because of its singling out of Israel, was antisemitic in its effect if not necessarily in its intent.

I'm not someone who has experienced antisemitism personally or someone who is enormously on the lookout for it. I had always taken that as a sign of the remarkable progress that our society had made. But the number of these episodes like the divestiture movement, served as a useful reminder that some of the much darker impulses are not entirely curbed to this day.

I spoke out also because it seemed to me there were a number of disturbing trends--the proposals taken seriously in many parts of British academia for academic boycotts of Israeli scholars, what was taking place in continental Europe, the movements within some religious denominations in the United States to call for divestiture of companies that did business with Israel. All of this suggested to me a lot of reason for a climate of concern, and that's why I spoke out.

I think the magnitude of the reaction I got was not something I fully anticipated. I had the reaction that, if people had felt so inhibited from speaking on these issues that they praised my courage, that there must be a larger problem around these issues on university campuses than I had previously supposed. I think it might have been a more difficult decision if I had known just how much attention those remarks would generate, but while it would have been a more difficult decision, I think I would have been even more convinced of the importance of speaking out in the way that I did.