As a young man in the South, Kevin Gover witnessed prejudice of all kinds, including antisemitism. Today, in his office across the National Mall from the U.S. Holocaust Memorial Museum, Gover reflects on some of the shared goals and challenges for Jews and Native Americans. 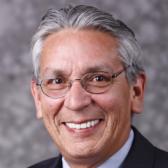 As a young man in the South, Kevin Gover witnessed prejudice of all kinds, including antisemitism. Today, in his office across the National Mall from the U.S. Holocaust Memorial Museum, Gover reflects on some of the shared goals and challenges for Jews and Native Americans.

KEVIN GOVER:
There certainly are places and times where what happened to Indians very closely resembles Jews in Europe during World War II. Everything from systematic killing—the hunting of them and their murder—to the use of propaganda to fire up the public to engage in that sort of conduct. And so the Holocaust is something that we study and that we need to understand in order to really understand the Native American experience as well.

ALEISA FISHMAN:
Kevin Gover began his career as a civil rights attorney, worked as Assistant Secretary for Indian Affairs at the Department of the Interior, taught law at Arizona State University, and is now director of the National Museum of the American Indian in Washington D.C. His Pawnee tribal name means "Shield Chief," and in many ways throughout his life Gover has protected Native rights and culture.

As a young man in the South, Gover witnessed prejudice of all kinds, including antisemitism. Today, in his office across the National Mall from the U.S. Holocaust Memorial Museum, Gover reflects on some of the shared goals and challenges for Jews and Native Americans.

Welcome to Voices on Antisemitism, a podcast series from the United States Holocaust Memorial Museum made possible by generous support from the Oliver and Elizabeth Stanton Foundation. I'm Aleisa Fishman. Every month, we invite a guest to reflect about the many ways that antisemitism and hatred influence our world today. From the National Museum of the American Indian, here's Kevin Gover.

KEVIN GOVER:
I grew up in Lawton, Oklahoma. Lawton is in the center of what used to be the Kiowa-Comanche-Apache Reservation. I am part Comanche, but my tribal membership is with the Pawnee Nation.

By training I'm a lawyer and practiced law for a number of years in Washington D.C. and New Mexico, entirely representing Indian tribes in the United States. And one of the things that struck me, in my law career, was how many of the lawyers from the '30s, '40s, and '50s who were representing Indian tribes, when it wasn't a popular thing to do, were Jewish. And, in fact, everyone would agree that the greatest lawyer in our field in history was Felix Cohen. He wrote the Handbook of Federal Indian Law.

I think we have to be careful going too far with the parallels between the Holocaust and the Native American experience, for several reasons. One is that the experience of any given Native community would be very different from the next one, and it wasn't all as terrible, depending on where you were. Second, the greatest killer of Indians, the real depopulation of the Americas occurred due to disease. And we mourn that, of course, but we also have to acknowledge that it wasn't deliberate in the way that the Holocaust was. We never saw in the Americas this mechanized, systematic killing that Jewish people experienced in Europe. On the other hand, there are lessons that all people can learn from the experience of Native people that was similar to the Holocaust.

In the end though, I find both of them to be inspiring stories, because for all that happened…and in some ways we can never recover, but in every way that we can, we are. And that really is quite extraordinary and shouldn't be forgotten. And that's why it's so important that people like us examine these stories and bring them forward, because they hold lessons, not just for the Native people of today but for all people.