Judea Pearl, father of slain journalist Daniel Pearl, describes himself as a soldier battling the tsunami of hatred that has defined the twenty-first century. 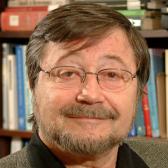 Judea Pearl, father of slain journalist Daniel Pearl, describes himself as a soldier battling the tsunami of hatred that has defined the twenty-first century.

JUDEA PEARL:
The number of people in the past two decades that crossed from the camp of reason to the camp of hatred is unprecedented. We are talking about millions and millions, perhaps billions of people crossing this line. And we haven't seen yet the explosion of this combustible anger that I'm talking about. And we must ask ourselves: Who is attending to the coming explosion, to the hatred that is building up? And I see myself as a lone soldier in that battle. And the weapon that I bring to the table is the legacy of my son Daniel Pearl.

DANIEL GREENE:
In 2002, journalist Daniel Pearl was kidnapped and killed by radical extremists in Pakistan. A video of his murder was posted on the Internet and seen around the world. That year, Daniel's parents, Judea and Ruth Pearl, founded the Daniel Pearl Foundation to promote the principles central to their son's life and work—pluralism, cross cultural understanding, and respect. Judea Pearl hopes that his work as president of the foundation will provide opportunities to fight violence that stems from hatred.

Welcome to Voices on Antisemitism, a free podcast series of the United States Holocaust Memorial Museum. I'm Daniel Greene. Every other week, we invite a guest to reflect about the many ways that antisemitism and hatred influence our world today. Here's President of the Daniel Pearl Foundation, Professor Judea Pearl.

JUDEA PEARL:
In the murder of my son, you see a microcosm of the twenty-first century. When Danny was abducted, the first e-mails that we received were aimed at his Americanism, they changed into Jewishness, and then in the actual murder scene, we see anti-Israel, anti-Zionist images projected. They cut and pasted only those areas which they perceived to be justifications for what they planned to do.

Of course, one cannot compare what happened to Danny with the Holocaust. The size difference is unimaginable. At the same time, let's not forget that even the Nazis tried to hide their deeds, either for shame or for fear. And here we have a bunch of people who boast their deeds, take pride in killing an unarmed journalist, and moreover, they expect their audience to rally in their support. And moreover, their audiences do rally in support. So we are facing here a phenomenon which is unprecedented. The depth of hatred is not something that our recent history has encountered.

See, Muslims are angry at Jews because they support a state which they perceive to be an outpost of European imperialism. And Jews are angry at Muslims for exactly the same reason, that they have not been able to perceive the State of Israel as a homecoming, but as a foreign entity in the Middle East. And its very important, I believe it's a key to understanding, is for both sides to be aware and to be familiar with the other side's narrative.

So, we have initiated the Daniel Pearl Muslim-Jewish Dialogue of Understanding, and we are going from town to town and speaking from a bare stage to a mixed audience. And we have two rules of conduct. One rule is no issue is a taboo—hot issue first, as a matter of fact. And the second one is respect at all times. We do touch on hot issues, and the audience gets a chance to see those issues discussed with respect and a willingness to understand.

So you asked me how we are attempting to contain the tsunami of hatred, and one of our projects is the Daniel Pearl World Music Days, where we run hundreds of concerts in the week around his birthday, where musicians, thousands of musicians are voicing their defiance of terrorism and their hope for sanity and humanity. And this is a tremendous opportunity for people of good will to empower themselves with the electricity of togetherness and with the idea that they are not alone. That everywhere on that week around the globe, there is music being produced for tolerance and humanity. So it's a very powerful project that I hope listeners will be able to join.

So stop the quiet music that you have there, the quiet background music, and put something which shakes the listeners and calls for arms. A call for arms, yes. Put something like: (humming). Something like that, you know? Triumphant. Right. Ok. Good.

Visit the website of the Daniel Pearl Foundation (external link)