For more than forty years, Father John Pawlikowski has urged Catholics and others to confront the long history of Christian antisemitism. 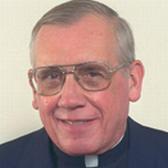 For more than forty years, Father John Pawlikowski has urged Catholics and others to confront the long history of Christian antisemitism.

DANIEL GREENE:
For more than forty years, Father John Pawlikowski has urged Catholics and others to confront the long history of Christian antisemitism. The Holocaust, Pawlikowski says, must remain a central issue for Christian identity and reflection. Today, as a professor of social ethics at Catholic Theological Union in Chicago, Pawlikowski has become a leading figure in promoting Catholic-Jewish dialogue and interfaith relations.

Welcome to Voices on Antisemitism, a free podcast series of the United States Holocaust Memorial Museum. I'm Daniel Greene. Every other week, we invite a guest to reflect about the many ways that antisemitism and hatred influence our world today. Here's Father John Pawlikowski.

FATHER JOHN PAWLIKOWSKI:
Christianity historically promoted antisemitism, anti-Judaism. One only has to look at the history of Christian art, for example. There's the famous images on the façade of the Catholic cathedral in Strasbourg, France, where Judaism and Christianity are contrasted—Judaism being presented in the guise of a bedraggled, blindfolded, bent over old woman, holding a broken Torah, and Christianity being presented in the guise of a vibrant young woman holding a book of the Gospel and so on. I mean that kind of contrast clearly leads to an extremely negative understanding of Jews and Judaism, something that was part of Christian culture almost everywhere, in every period of history from the second century up in, really into the twentieth century.

On one level it is absolutely true to say that Nazism was an altogether pagan phenomenon, and in a sense was fundamentally anti-religious across the board. However, I think Hitler very very much depended on the use of this classical Christian antisemitism as a great asset in rallying the popular masses towards support of his ideology.

There is an unwillingness to acknowledge that the Church as an institution played a significant role in the promotion of antisemitism. There's the claim by some in Christianity that, "Yes there were a few bad apples who did collaborate with the Nazis or who promoted antisemitism over the centuries, but they were kind of led astray." Well, but who led them astray? I mean that's the question I and some of my colleagues had. It was the Christian preachers, it was the artwork of the Church, so on and so forth. And I think any religious tradition that continues to harbor within itself seeds of violence and seeds of discrimination against other people simply mutes any credible moral influence that it may have.

I mean, the Church is on one hand a human institution, and I've always seen the ability to critique in a loving way, in a honest way, but nonetheless in a hard-hitting way, failures on the part of the Church as integral to the authentic expression of faith.

I think the struggle for human rights, the struggle for human dignity, is at the core of an authentic understanding of the teachings of Christ, but I think also there's a self-interest, I think, on the part of Christians and all religious people, in preserving the dignity of the other. There cannot be peace in the world without peace among the world's religions, so the protection of the human rights and human dignity of another is also in many ways the protection and guarantee of our own human rights and our own human dignity.