James Loeffler is an associate professor of history and Jewish studies at the University of Virginia. He is a trained pianist, musicologist, and specialist on Jewish classical music. He serves as scholar-in-residence at Pro Musica Hebraica in Washington, DC, and has curated concerts at the Kennedy Center. 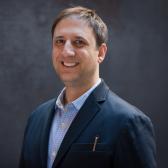 James Loeffler is an associate professor of history and Jewish studies at the University of Virginia. He is a trained pianist, musicologist, and specialist on Jewish classical music. He serves as scholar-in-residence at Pro Musica Hebraica in Washington, DC, and has curated concerts at the Kennedy Center.

JAMES LOEFFLER
It’s always very striking to me that people will focus a lot of attention on a narrow set of questions about how much Wagner influenced Hitler. But in reality, Wagner’s shadow is much broader and darker in a way, because it filters into how generations of music critics and musicians treat Jews as they flock into the world of classical music.

ALEISA FISHMAN
James Loeffler is an associate professor of history and Jewish studies at the University of Virginia. He is a trained pianist, musicologist, and specialist on Jewish classical music. He serves as scholar-in-residence at Pro Musica Hebraica in Washington, DC, and has curated concerts at the Kennedy Center.

Welcome to Voices on Antisemitism, a podcast series from the United States Holocaust Memorial Museum made possible by generous support from the Elizabeth and Oliver Stanton Foundation. I’m Aleisa Fishman. Every month, we invite a guest to reflect about the many ways that antisemitism and hatred influence our world today. From Washington DC, here’s James Loeffler.

JAMES LOEFFLER
I grew up playing piano, training as a classical pianist and a jazz pianist, and so I was deeply interested in classical music’s history and naturally curious about where Jews fit into that story. Having been taught about Wagner just as a great German composer, who wrote operas with crazy plots and dramatic storylines, and kind of a really gripping total view of art and theater and music all coming together—that was the Wagner I knew about growing up. I don’t think it was until college, when I opened a book about the history of antisemitism and was surprised to find a chapter that Richard Wagner was one of the forefathers of modern antisemitism. And that came as a great surprise to me, because I didn’t know any of that about him.

Wagner decided in 1850 to write an essay. And he published an essay in a German newspaper about, as he called it, “Jewry in Music.” He basically began to spout viciously antisemitic ideas about Jews and their role in European culture and their kind of physical limitations as artists, and basically created a whole new strain of what we might call musical antisemitism.

So in a sense, what Wagner does in the essay is basically say that the Jews can never be truly European, they can never be truly German or French or Russian or Italian, because there’s something about their essence which marks them as different, and because they can’t be that they can’t create the true kind of art that comes from a deep belonging to a nation.

The Nazi embrace of Wagner is a really interesting phenomenon, both for reasons obvious and less obvious. The first thing to say is Wagner had a grandiose world vision at which he was in the center of redeeming mankind through him and through the German nation. And this is something that clearly resonated with Hitler and with the Nazis as they began to imagine themselves as engaged in something beyond simply fixing Germany or pushing a new political ideology, but actually launching a transformation of the whole world. Wagner promoted an ideal of spectacle. His operas weren’t just operas. He considered them to be a kind of art that would combine theater, literature, language, music, movement—all of these things—ideas, into one kind of total work that would capture the public in a new way. And the Nazis were attracted to that. If you look at the footage of the rallies, the famous Nuremburg rallies and other rallies that the Nazis staged, they wanted to seduce the German people and seduce the world with this image of power, of mythology, mythos, and they got a lot of that from Wagner, not only from Wagner, but certainly a lot from Wagner. Conveniently, he was also an antisemite, and so his kind of greatness made him an icon of German culture, and his antisemitism therefore gave it kind of a seal of approval almost, that the two necessarily went hand in hand. So for Hitler and for the Nazis, these things were all attractive about Wagner.

The important thing to understand with Wagner is that there’s hard and soft versions of Wagner’s legacy. I think the hard version is the more obvious, but it’s often overstated, and that’s simply that he puts into circulation certain truly virulent myths about Jews and music and antisemitism that become recycled and expanded, amplified by the Nazis later on. The softer version is less known, but its significance may be even greater, which is that in the five decades after Wagner’s death, all across Europe, his ideas began to kind of seep into the way in which musicians thought about Jews and Jewish composers as somehow illegitimate, as somehow incapable of writing their own true music. And that’s a very interesting myth, because it’s not as visible to us today, right? What that meant in practice is that people began to say that, of course Mendelssohn was not as great a composer as Beethoven or as Wagner. Why? Because he was a Jew. So that’s the other legacy, and that’s the legacy, which in some ways actually outlives even the Holocaust, as a kind of antisemitism after the Nazis, that stretches all the way back to Wagner.

I don’t see the antisemitic language coded through his operas the way some people do. In fact, I feel like it’s kind of a false chase to go looking for it there. I don’t think we have to find antisemitism in every aspect of a great artist’s art to know that it’s part of his ideas. One of the things that I often puzzle over is why there is such a focus only on that kind of narrow question, and not about the other aspects of Wagner’s legacy that continue to shape us today. Which is to say, I’d rather that there was more attention to all the composers negatively affected by Wagner, all the musicians whose lives were disrupted, all the music that he’s pushed out of hearing. A focus on that, instead of a focus on whether or not his overture can be played or his operas can be played. Those are important questions, but sometimes they prove a distraction from the bigger issues about exactly what Wagner contributed to modern antisemitism, and how he distorted our hearing of our own shared musical past.