Jamel Bettaieb teaches German to high-school students, which affords him an opportunity that is rare in Tunisia: to teach about the Holocaust. An active participant in Tunisia's recent revolution, Bettaieb strives to be an agent of change in the Muslim world, pushing back against propaganda, antisemitism, and silence about the Holocaust. 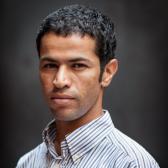 Jamel Bettaieb teaches German to high-school students, which affords him an opportunity that is rare in Tunisia: to teach about the Holocaust. An active participant in Tunisia's recent revolution, Bettaieb strives to be an agent of change in the Muslim world, pushing back against propaganda, antisemitism, and silence about the Holocaust.

JAMEL BETTAIEB:
People should understand that we have a Jewish minority, they are part of our history, part of our culture, and then you can speak about what happened to them during the German occupation.

ALEISA FISHMAN:
Jamel Bettaieb teaches German to high-school students in Tunisia. It's a role that affords him an opportunity that is rare in his country: to teach about the Holocaust. An active participant in Tunisia's recent revolution, Bettaieb strives to be an agent of change in the Muslim world, pushing back against propaganda, antisemitism, and silence about the Holocaust.

Welcome to Voices on Antisemitism, a podcast series from the United States Holocaust Memorial Museum made possible by generous support from the Elizabeth and Oliver Stanton Foundation. I'm Aleisa Fishman. Every month, we invite a guest to reflect about the many ways that antisemitism and hatred influence our world today. Here's human-rights activist Jamel Bettaieb.

JAMEL BETTAIEB:
I studied in Tunis…German language, literature, and history. I remember we studied a semester, a whole semester, about Nazi Germany. That's when I really got the idea about the Holocaust. It's not a common subject in Tunisia, not a lot of people talk about that, and there is even some people who deny that.

And in Tunisia, it is still like a taboo. Because, you know, if you speak about Jews, you are automatically defending Israeli policies. There is, like, stupid confusion between Israel and Judaism. So my first mission, I think, would be to make that separation between Israel—State of Israel and its policy—and Judaism and Jewish culture and Jews as human like us.

I work to teach the students German language and, implicit in the lessons, the German culture and the German history. For example, if you teach about food and beverage, you should say to the students that Germans like beer and they have international festival of beer called Oktoberfest. If you teach about the city…we teach about Berlin, the monuments in Berlin, and there is a little bit to give idea about what was the Second World War, etcetera.

Many times students…it's a common question: "Sir, what do you think about Hitler?" And unfortunately, there are some students that think Hitler was a national hero. I found, for example, in this last school year, I found the book Mein Kampf in Arabic. In that moment I was obliged to explain to them that Hitler was a criminal. He killed Jews; he killed gypsies; he killed a lot of innocent people: children, women, teenagers like you. And if he stayed longer in power here or if Germany dominated the world, he'd maybe kill us: Tunisians and Arabs and Muslims, everybody. It's a very racist theory. So that's the opportunities I had to speak to the students.

Our youth has bad models. Like, they think that Saddam Hussein, for example, was a great man. And I say to them, "Never trust and never admire someone who killed his own people; like Hitler, like Saddam, because they are criminals, not good people, you know?"

We suffered dictatorship, and now our country is free, but we still have many things to do. First thing, we should learn democracy: how to live together, how to be tolerant, how to accept the other. And as I told you, the Holocaust is an important part of our history, but nobody speak about it. My countrymen were victims. Tunisian Jews are my countrymen, like me; Tunisians, you know, were victims also of that. The Holocaust was a crime against humanity. People should understand that should never happen. If you want to understand your present, and make plans for your future, you must know exactly your past.