Gerda Klein survived the Holocaust and was liberated by an American soldier who she eventually married. Here, Klein discusses her understanding of hatred and antisemitism today. 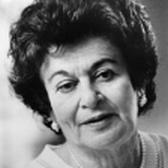 Gerda Klein survived the Holocaust and was liberated by an American soldier who she eventually married. Here, Klein discusses her understanding of hatred and antisemitism today.

GERDA WEISSMANN KLEIN:
Antisemitism, of course, matters. Particularly, I mean, it's particularly a great matter to me because, you know, my whole family was killed for no other reason than I was born into a Jewish family. I couldn't be anything else. I couldn't be a boy. I was born a girl. I was born in a Jewish family. I was born Jewish. And, of course, you know, this is much broader because so many people are being misunderstood or maligned for whatever they were born or the way they look or what have you.

DANIEL GREENE:
Holocaust survivor Gerda Weissmann Klein has spent a lifetime educating others about the need for tolerance and understanding. For 60 years, she has written and spoken about her experiences in Nazi slave labor camps and on a death march through Germany at the end of the war, intended to eliminate all remaining witnesses. Klein survived that march, and, in fact, met her husband among the American soldiers who liberated her in 1945. Her experiences—like her writings—are full of tragedy, but also of hope.

Welcome to Voices on Antisemitism, a free podcast series of the United States Holocaust Memorial Museum. I'm Daniel Greene. Every other week, we invite a guest to reflect about the many ways that antisemitism and hatred influence our world today. Here's Holocaust survivor Gerda Weissmann Klein.

GERDA WEISSMANN KLEIN:
You know even in the darkest times of my life, when I was in the camps, the slave labor concentration camps, you pinned your hopes on the slightest thing. You know if somebody just reached out to you, or put their arm around you, or if you got a little bigger portion of bread it was a blessing. Consequently, I do believe in the basic goodness of people. But by the same token, you know, I'm not a Pollyanna. You know, I don't feel it's been, you know, pixie dust that has surrounded me, and I feel, you know, survival is an incredible privilege. To be free to have children, to have grandchildren, to walk without fear, to write, to do anything. But it's also a very deep obligation.

Look at, basically I've been an optimist. If I hadn't been an optimist I wouldn't be here. But I am terribly concerned what intolerance, which unfortunately now has been awakened again, might be doing to the safety of children. I mean I think since September 11th we have found that we have not been as safe as I had hoped and prayed that the world would be. And, quite honestly, sometimes I feel I have lived too long, you know. Unfortunately now there is, you know, there are no lines and no frontiers. There's nothing to cross. It's an entirely different war. A war which erupts any place. So, this is what is so terribly frightening and so sad--that a very small minority of fanatics could destroy the world. And of course, this is terribly painful, to see the most vicious and most horrible acts that have been committed on behalf of religion. And I am quite sure that this is not what God wants.

I do believe that we have to fight all kinds of intolerance. And, I think it hangs together being religious intolerance, racial intolerance, and—people have asked me, you know, "How many people were on the death march? Forty thousand? Four thousand?" I mean it makes no difference, forty thousand, four thousand, you know, unless you identify with one person. And until the world learns that we all have the same hearts, you know, some a little kinder than others. And, I think this is why it is important to talk. To talk about it and to give people hope, you know.