Racism and antisemitism have, unfortunately, been part of soccer culture for many decades. As a black player on predominantly white British teams, Garth Crooks experienced the problem firsthand, and now strives to purge the sport of prejudice and hate. 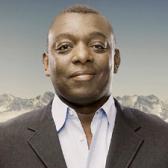 Racism and antisemitism have, unfortunately, been part of soccer culture for many decades. As a black player on predominantly white British teams, Garth Crooks experienced the problem firsthand, and now strives to purge the sport of prejudice and hate.

GARTH CROOKS:
I think something about sport's competitive nature and edge arouses such intense emotion in people. And I think that's why in sport things get out of hand sometimes. And if racism and antisemitism is allowed to pierce its way into elements of football, or any sport for that matter, it will spread like cancer and it will have exactly the same effect—it will destroy whatever it touches.

ALEISA FISHMAN:
Racism and antisemitism have, unfortunately, been part of soccer culture for many decades. As a black player on predominantly white British teams, Garth Crooks experienced the problem firsthand, and now strives to purge the sport of prejudice and hate. While much has changed over the course of his career, Crooks acknowledges that there is still work to do, particularly in places such as Poland, where a professional club recently was sanctioned for taunting its opponents with a blatantly antisemitic banner.

Welcome to Voices on Antisemitism, a podcast series from the United States Holocaust Memorial Museum made possible by generous support from the Oliver and Elizabeth Stanton Foundation. I'm Aleisa Fishman. Every month, we invite a guest to reflect about the many ways that antisemitism and hatred influence our world today. From BBC studios in London, here's Garth Crooks.

GARTH CROOKS:
Well, my name is Garth Crooks. I'm a former professional soccer player. We say football player in the UK, and generally in Europe. I started playing football professionally with my hometown, Stoke City. I am a son of Jamaican immigrants who came to the UK in the 1950s. I lived a stone's throw away from the football grounds, so I grew up with the love of football, hearing it every week.

When I started in the mid-to-late '70s, it was very common for black players to be booed. Thirty years ago, it wasn't unusual to have bananas thrown at you, derogatory banners and terms displayed at football grounds. People telling you quite bluntly what they thought you were. Many, many black players were abused by fans. And not only did the fans not say anything, the authorities didn't say anything either. Today, it's very, very different.

There are parts of Europe, of course—Italy, they still have a problem with black players, Jewish players, racism, and antisemitism. Gypsies, Romanies still have a big problem in parts of Eastern Europe. And the fight goes on in trying to use football as a platform to address these issues.

I joined the professional football association and worked very hard to implement policies where the players made it clear that they wouldn't tolerate players behaving badly. I think it's very healthy that we have opportunities to address issues that from time to time cause the game great embarrassment. FIFA, the world governing body of football, has done fantastic work in making sure that all their associations and affiliate members have anti-racism policies high on their agenda. And people who fall foul of racist policies are brought to book. There's no hiding place. It's zero tolerance.

I've been in professional sports in one way or another all my life and the dynamic of team sport in particular provides you with all the essence of learning how to cope with people, to understand people, to cope with their differences. You've got to develop a spirit that bonds you together. Sport can do that. And because it does those things, I actually believe that sport is a great unifying factor. You've got to put aside what you look like, what color you are, how tall you are; you've got to make it work if you want to be successful. And that is a great philosophy to adopt at any walk of life, in any job, and anything you do. But by goodness it works in sport.