In his book, Fariborz Mokhtari brings to light the story of Abdol Hossein Sardari, sometimes called "the Iranian Schindler" for his efforts to save Jews during World War II. Mokhtari hopes to encourage new conversations about the Holocaust and about Iran. 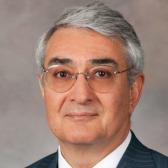 In his book, Fariborz Mokhtari brings to light the story of Abdol Hossein Sardari, sometimes called "the Iranian Schindler" for his efforts to save Jews during World War II. Mokhtari hopes to encourage new conversations about the Holocaust and about Iran.

FARIBORZ MOKHTARI:
The impression had been created that Iranians were anti-Jewish; that they were pro-Nazi; that they were collaborators with the Nazis. And all of these were painful misrepresentations. And I felt culturally obligated to bring to light the truth that I knew, that I had grown up with.

ALEISA FISHMAN:
In his book, In the Lion's Shadow, Fariborz Mokhtari brings to light the story of Abdol Hossein Sardari, sometimes called "the Iranian Schindler" for his efforts to save Jews during World War II. Mokhtari hopes to encourage new conversations about the Holocaust and about Iran.

Welcome to Voices on Antisemitism, a podcast series from the United States Holocaust Memorial Museum made possible by generous support from the Elizabeth and Oliver Stanton Foundation. I'm Aleisa Fishman. Every month, we invite a guest to reflect about the many ways that antisemitism and hatred influence our world today. Recorded during a visit to the U.S. Holocaust Memorial Museum, here's Fariborz Mokhtari.

FARIBORZ MOKHTARI:
Abdol Hossein Sardari was a young diplomat who was in charge of Iran's legation in Paris during the Second World War. Sardari did everything he could to save Jews in the area under his authority. Now, what he did was, he created documents and documentations and arguments to convince the Nazis that the Iranian Jews in Europe were not racially related to the European Jewry. And therefore he argued that they were not a race aside from the Iranians, but rather Iranians who wanted to follow the teachings of Prophet Moses. He talks about the language: they do not speak Hebrew, they do not speak Yiddish, they speak Persian. Their names are Iranian names. So he constantly builds on this. And of course the Germans send these to so-called racial experts. Racial experts send them to universities, and the universities respond: "This is a very interesting thing to study, but we need more budget." And of course this goes on and on, and he keeps the wheels turning by writing more and more and more. And in the meantime, time passes and he continues doing what he's doing.

So it really is a very creative process, and he did it with tremendous energy. He started working to save first the Iranian Jews—because he was after all a representative of the Iranian government. But as he started doing it, these Iranians went to him and asked, "Well, we are married to non-Iranians. We have friends who are non-Iranians. We have partners, business partners, who are non-Iranians." And therefore he engaged in creating papers and documents and so on that would help them.

But the Germans were never satisfied with one document. If somebody had a passport—even a passport—they wanted a secondary document to check to make sure. I mean he was the representative of a government that had declared war on Germany. So he was in danger. Secondly, his own government at that point ordered him to return to Iran. He did not. He disobeyed his own government. He got into trouble for that, and they cut his salary. So from then, until the end of the war, he basically lived on his own resources, which, because money could not be sent back and forth, were meager. He really was interested in helping. He didn't want anything in return. My feeling was that this is a story that ought to be told; this is a story that ought to be known. This is a man who did the right thing when the occasion really called for it.