Erica Lehrer founded the Centre for Ethnographic Research and Exhibition in the Aftermath of Violence at Concordia University. In 2013, she curated “Souvenir, Talisman, Toy,” an exhibition of Polish-made figurines depicting Jews. And she is the author of Jewish Poland Revisited: Heritage Tourism in Unquiet Places. 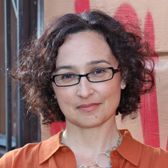 Erica Lehrer founded the Centre for Ethnographic Research and Exhibition in the Aftermath of Violence at Concordia University. In 2013, she curated “Souvenir, Talisman, Toy,” an exhibition of Polish-made figurines depicting Jews. And she is the author of Jewish Poland Revisited: Heritage Tourism in Unquiet Places.

ERICA LEHRER:
Anything that touches on contemporary Polish-Jewish relations is so fraught, and the positions are so predetermined and sedimented with emotion that sometimes it’s hard to shift the discussion to make it productive. So part of what I wanted to do was make a space where people could actually identify and ask all the questions that they have. Because, to me, that’s really the starting point of a new discussion.

ALEISA FISHMAN:
Erica Lehrer founded the Centre for Ethnographic Research and Exhibition in the Aftermath of Violence at Concordia University. In 2013, she curated “Souvenir, Talisman, Toy,” an exhibition of Polish-made figurines depicting Jews. And she is the author of Jewish Poland Revisited: Heritage Tourism in Unquiet Places.

Welcome to Voices on Antisemitism, a podcast series from the United States Holocaust Memorial Museum made possible by generous support from the Elizabeth and Oliver Stanton Foundation. I’m Aleisa Fishman. Every month, we invite a guest to reflect about the many ways that antisemitism and hatred influence our world today. From Montreal, here’s Erica Lehrer.

ERICA LEHRER:
In 2013, I worked with the Seweryn Udziela Ethnographic Museum in Krakow, in Kazimierz, which is the historical Jewish quarter of the city. And I curated an exhibition called “Souvenir, Talisman, Toy.” And it took this actually long historical phenomenon of Polish folk art that creates figurines depicting Jews, and I tried to put that in various contexts to understand it in light of the fact that there’s been an explosion of popularity of these figurines that’s kind of developed along with the new interest that’s developed in Poland about Jews more generally. And, of course, it’s also developed alongside the development of a Jewish heritage tourist industry, which includes many Jews from abroad coming to Poland to visit ancestral sites or sites related to the Holocaust.

I came to Poland for the first time in 1990. I was a college student. I was simply interested in the major political transformations that were happening in Eastern Europe. But when I got there, I started thinking more about my own Polish-Jewish family roots. And, on my very first trip, I saw a figurine of a Jew in a market stall, and frankly I was shocked and I just immediately thought that that’s antisemitic. And I think in that way, I’m very common. I think many Jews who are traveling to Poland, with the Holocaust on their mind, seeing a figurine of a Jew, it feels rather inflammatory and shocking, and mostly it gets read in the context of antisemitism. And I just became fascinated with questions of: “Well, what are these things and where do they come from? And who sells them, and who makes them?” And once I started talking to people who made the figurines in particular, as well, frankly, as Polish non-Jewish people who sometimes bought the figurines, the picture started to get much more complicated.

In my exhibition, I wanted to raise a question about the different ways that Jews have been depicted in Polish folk art. I see this as a long, evolving history of a kind of image. And to my eye, some of the figurines are much more either realistic or sensitive depictions of Jews or depictions that seem to have a kind of individuality to them. The folk artists who I interviewed, some of them—particularly the older ones who remembered their Jewish neighbors—you saw kinds of specificity to the figurines and sometimes what seemed like a rather artistic, sensitive treatment. So you start to see them differently when you also understand the origins of some of them.

If the question is what do these figurines mean, it really depends both on whom you’re asking, and also on which genre of figurines you’re looking at. So, Polish figurines depicting Jews, they’ve been around for a long time, and their forms have kind of evolved and served different needs at different times—whether as tourist keepsakes or as tokens of this deeply nostalgic, or even sort of political, attempt to reconnect with the Jewish past. Second, as these good luck charms, that are meant to bring prosperity at home or in business. And then, lastly, as these playthings that sort of lightly mock Jewish dress, Jewish facial features, Jewish behaviors, et cetera. And of course, there’s this new genre of figurines where many of these figures now also have a coin. So it’s like one Polish penny—it’s called a grosz—kind of stuck to the figurine. And they raise new questions about, you know, even if the image of the Jew for a long historical sweep has been connected to ideas of magic and plenty and wealth, one can’t understand this without recourse to a history of antisemitic imagery.

And I think that’s part of what I was trying to bring to a Polish point of view on them, to say, this needs to be part of the context in which these figurines are understood. But, because I was dealing with two separate audiences: a Polish audience, in which there’s a folk culture in which these figurines are seen as bringing luck and they’re seen as innocent and they’re seen as even complimentary towards Jews—highlighting the supposed talent for business that Polish people in this day and age perhaps want to emulate. There’s also a Jewish audience for them, who in my experience (including my own experience) can’t see them outside of the context of antisemitism, can’t see that there’s anything else in them besides antisemitism. Because these figurines fit within a long history and are also embedded in a complex set of relationships in the present day, I wanted to show them in their complexity. I wanted to show them in a way that you could see that there were more things going on than only antisemitism.

In my exhibition in Poland I actually did include a couple of figurines from North America. So I included a figurine of a Native American, one of these little, sort of “Indian Princesses.” And I also included some Jewish figurines made in Israel to show that thinking about small figurines of Jews is not only a Polish phenomenon and may be seen un-problematically elsewhere. And then in the book I also included small figurines of African Americans. So, the reason that I did that is because I wanted to be able to broaden the conversation in Poland. But I wanted to say, “Look, I’m not coming here as a Jewish person to point my finger at Poland and say, ‘Look how horrible you guys are because you make these figurines of Jews.’” I wanted to say, “Look, there’s a broader issue. This happens in different places.”

But I think another thing that looking at these other objects, these other kinds of objects does—vis-a-vis the discussion about Jewish figurines in Poland—is they help, in my mind, to open up the discussion with the second audience, which is Jewish people from abroad. So, for example, do you have…is there a shop in your town that has a tobacco store Indian standing in front of it? Do you maybe have a Native American dreamcatcher hanging from your rearview mirror? Do you have, perhaps, salt and pepper shakers in your home that depict Aunt Jemima or a smiling black servant? Simply to say we all live on the backdrop of these really terrible histories of inequality and oppression, and many of us still have seemingly innocent, nostalgic relations to these things, even in ways that we may not notice. So on the one hand, they’re problematic, but on the other hand, trying to understand what all the layers of meaning and experience and stereotype and curiosity and guilt that a person may bring to the figurines is something that I think is worth exploring.