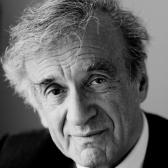 ELIE WIESEL:
Indifference is such an easy option. You don't have to give your time. You can stay home, eat your meals, go to sleep, rather than be concerned with people who suffer and people who live in fear, naturally.

DANIEL GREENE:
Elie Wiesel—Holocaust survivor, best-selling author, and Nobel Peace Prize recipient—has worked tirelessly to combat intolerance, injustice, and apathy. Earlier this year, Wiesel was accosted by a Holocaust denier at a hotel in San Francisco. While the attack left him physically unharmed, the incident led Wiesel to reflect on a recurring theme in his work, which he calls "the perils of indifference."

Welcome to Voices on Antisemitism, a free podcast series of the United States Holocaust Memorial Museum. I'm Daniel Greene. Every other week, we invite a guest to reflect about the many ways that antisemitism and hatred influence our world today. From his office in New York City, here's Elie Wiesel.

ELIE WIESEL:
I'll give you an example. That person attacked me—okay?—and we were already outside the elevator and he tried to pull me into his room. And I began shouting, literally howling. I've never heard myself howl like that—"Help, help, help." I must have shouted for three minutes. Not one door opened. Then when I went down to the security people, and they said, "Maybe three people called us that they heard your shouts." Three—there must have been 20, 30, because it was 6 in the evening—6, 7 in the evening—but not one door opened. So how can you not feel discouraged?

What I make of that? Indifference, you know. I fought all my life against indifference. Yes, at least three of them called, but even they didn't open a door. That is painful. That means, what have I done with all of my work? Trying to wake people up.

Even in moral terms, morality means concern for the other, not for oneself—the other.

In order to feel empathy and compassion for and with a person who is alone, suffering, in desperation, it's only because we remember others who were alone, suffering, and in despair. It happens that not only one person, but the group may forget. Forgetting means the end of civilization, the end of culture, the end of generosity, the end of compassion, the end of humanity. And therefore I celebrate memory, and I try to strengthen it. And I believe—I still do, in spite of everything—that memory is a shield. If we remember what people can do to each other, then we can help those who tomorrow may be threatened by the same enemy.

Oh they are so beautiful, mainly from 12-year-old, 16-year-old, 10-year-old children, saying—asking questions and—or saying what they feel. And I'm very touched by them. I cannot tell you how. I'm really touched.

You know what? Let's open it. This comes from North Carolina, Winston Salem, North Carolina: "Dear Mr. Wiesel: I am 16-years-old. I read Night. Night is an extraordinary book. The part in the book when you were riding on the train to the camp impacted me most because that seemed like the most frightening. Would you ever think about moving back home, or is it too painful?"