Edward Serotta founded Centropa in 2000 to preserve memories of Jewish life before, during, and after the Holocaust. Centropa has trained thousands of schoolteachers to bring this material into classrooms from Gastonia, North Carolina, to Vilnius, Lithuania. A strong believer in the power of personal narrative, Serotta hopes that Centropa stories will resonate with new generations, who may never have the opportunity to engage with a survivor in person. 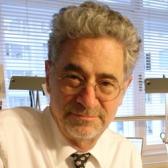 Edward Serotta founded Centropa in 2000 to preserve memories of Jewish life before, during, and after the Holocaust. Centropa has trained thousands of schoolteachers to bring this material into classrooms from Gastonia, North Carolina, to Vilnius, Lithuania. A strong believer in the power of personal narrative, Serotta hopes that Centropa stories will resonate with new generations, who may never have the opportunity to engage with a survivor in person.

EDWARD SEROTTA:
The great Jewish communities of Central and Eastern Europe are now gone, and our goal was to ask the oldest living Jews throughout this region to paint a picture of the entire 20th century as they lived it, from their childhood all the way to their grandchildren.

ALEISA FISHMAN:
Edward Serotta founded Centropa in 2000 to preserve memories of Jewish life before, during, and after the Holocaust. Centropa has trained thousands of schoolteachers to bring this material into classrooms from Gastonia, North Carolina, to Vilnius, Lithuania. A strong believer in the power of personal narrative, Serotta hopes that Centropa stories will resonate with new generations, who may never have the opportunity to engage with a survivor in person.

Welcome to Voices on Antisemitism, a podcast series from the United States Holocaust Memorial Museum made possible by generous support from the Elizabeth and Oliver Stanton Foundation. I’m Aleisa Fishman. Every month, we invite a guest to reflect about the many ways that antisemitism and hatred influence our world today. From Vienna, here’s Edward Serotta.

EDWARD SEROTTA:
I had been making a film in 1999 for ABC News “Nightline.” It was about a Jewish old age home and a soup kitchen in a town called Arad, Romania, and I was going home with the old people there every afternoon and they were showing me their old family pictures and they were regaling me with stories. And I said to myself, who collects this kind of stuff?

Now I was telling the story to my editor and he said you ought to meet my two good friends Eszter Andor and Dora Sardi because they just watched their grandparents’ Shoah Foundation interviews on video and they were very moved by it. Maybe you should talk to them? Which I did, we went to dinner. Now, what made it interesting is both Dora and Esther had just had babies and, as we sat there in a restaurant, they had squiggling little babies on their laps, both of them said, we love the fact that our grandparents had done these interviews, but it’s not the only thing we want to give our children when they grow up. And I said, “Do your grandparents have old family pictures?” And they said, “Yeah, tons.” I said, “And do they tell stories about them?” And they said, “They never stop!” And so working with Dora and Eszter we pooled our ideas to create a program for interviewing elderly Jews, at that time only in Hungary and then we’ve expanded since then.

Centropa was formed I would say not so much to catalog the destruction of Jewish life in Central and Eastern Europe during the Holocaust, we were formed really much more to ask the oldest living Jews to paint us a picture about the world that was destroyed. And instead of using video in our interviews, we decided to scan their family pictures and ask them to tell us stories about their lives through their pictures. And we kept coming back to them visit after visit after visit, sometimes six, seven, eight, nine visits, and each time we would divide up their life stories into various chapters. So that we’d say, today we’d like to really talk as much about school as possible. Like, this is a picture, Mrs. Schwartz, of you in this dress, do you remember this? And she’d say, “yes of course I remember this dress, this was, my father had bought this for me, it was for whatever it was,” etcetera, etcetera, and “I’m standing with my very best friend Marietka who lived not far from us.” And so what we tried to do was to ask each person to tell us as many stories as possible about each chapter in their lives as possible.

There’s no one who isn’t concerned about losing the last of our Holocaust survivors. We lost a man last week in our club in Budapest, Tibor Kacsa, who died at the age of 107, and until two months ago he came every single month to the “kaffee und kuchen” that we hold for our people in Budapest and in Vienna. And these clubs are not getting bigger; they’re getting smaller. But it’s what you do with these stories that makes them relevant, poignant, and compelling,

Why would an American kid care about prewar Jewish life in Central and Eastern Europe? The things that make a story meaningful to a person is if they can find the “me” in the story. And these personal stories of someone who tells you about their best friend at school and going on vacation with mom and dad, and where we went skiing, and then the descent into hell that they all went through—and we do cover the Holocaust in all of our stories because it’s the black hole into which every life was sucked. And then how they came out of it out of the other end, and managed one way or another to patch their lives back together and live again, and have children and grandchildren of their own, that’s powerful storytelling. And that’s what we have gathered. We’d love to have had more—we lose these people every month—but we’re confident that the way that we tell stories and what we do with the stories that we have can do a great deal of good in the world.