Eboo Patel insists that it is not enough for young people to unlearn the hatreds of previous generations. In bringing them together to serve their communities, Patel hopes that they will become the architects of greater religious understanding. 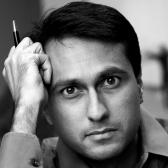 Eboo Patel insists that it is not enough for young people to unlearn the hatreds of previous generations. In bringing them together to serve their communities, Patel hopes that they will become the architects of greater religious understanding.

DANIEL GREENE:
In 1998, Eboo Patel founded a movement that brings together young people of different religious traditions to serve their communities. Patel insists that it is not enough for young people to unlearn the hatreds of previous generations. By working together, and coming to know and respect each other, Patel hopes that they will become the architects of greater religious understanding.

Welcome to Voices on Antisemitism, a free podcast series of the United States Holocaust Memorial Museum. I'm Daniel Greene. Every other week, we invite a guest to reflect about the many ways that antisemitism and hatred influence our world today. Here's founder of the Interfaith Youth Core, Eboo Patel.

EBOO PATEL:
Every totalitarian movement has young people at its center. I mean, there's a reason that Adolf Hitler started the Hitler Youth in Nazi Germany. It's because he understood the importance of involving young people in his ugly, totalitarian ideal. But what we don't know as much is, almost every powerful pluralist movement has also had young people at its center. And it gives me the chills to think that in 1955 in Montgomery, Alabama, the man who was galvanizing the civil rights movement was 26 years old. And in the early twentieth century in South Africa, the man who was fighting against the racist pass laws and really, in some ways, laying the foundation for Mandela's ANC [African National Congress] was even younger than King. He was 24 years old. And it was a young Mahatma Gandhi who would, of course, go on to define nonviolence in the twentieth century with his liberation of India. And, in the 1950s, the man who led his people out of occupied Tibet into India with grace and with calm was a man barely out of his teens, his holiness, the Dalai Lama. And, I'm struck that those movements have all had a religiously plural character and a religiously plural end goal, and they have all been led by young people.

There's a question about: Are there religious forces that divide, versus religious forces that unite, and which is stronger? Those forces are people. People divide or people unite. And we have very powerful dividers out there. We have people who are not shy about sowing division, and they exist in every religion. The question that we have to ask today is not whether this abstract amorphous thing called "religion" naturally divides or naturally unites. Religion does nothing. Religious people do things with religion. And I believe that there are prodigious resources in religious traditions for people to unite. And that's the movement that I'm trying to be a part of.

It is an unfortunate fact that there is a segment of the Muslim community today that has been infected with a form of antisemitism. It is ugly and I hate it, but it's true. And, what I am encouraged by is how prominent Muslim scholars and leaders are taking that on, head-on. And we're saying, "That is un-Islamic. That is the most un-Islamic thing that you can do—to hate another people or to think badly of another peoples' religion, based on a political conflict, because our prophet—May the peace and blessings of God be upon him—never did that."

But, the propensity of certain figures to take that group of antisemitic Muslims and to paint the entire Muslim world with that brush, and go even further than that and write contemporary antisemitism into the history and sources of Islam, I find deeply offensive. The second thing, it is hugely counterproductive. I mean who does it benefit to say that 1.4 billion people on earth are inherently hateful? What are you going to do? Once you have labeled 1.4 billion people hateful, what are you going to do? Put them all into camps? Vanquish them all? Convert them all? I mean it's just pragmatically the height of stupidity to work hard to label a fifth of humanity as somehow oppositional to the rest of humanity. Who is going to win in this?