Despina Stratigakos is an architectural historian at the University at Buffalo. Her recent book Hitler at Home examines the efforts of Hitler's interior designer Gerdy Troost to cultivate Hitler's image as both a refined statesman and a man of the people. 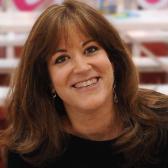 Despina Stratigakos is an architectural historian at the University at Buffalo. Her recent book Hitler at Home examines the efforts of Hitler's interior designer Gerdy Troost to cultivate Hitler's image as both a refined statesman and a man of the people.

DESPINA STRATIGAKOS:
Once I started to look for it, I couldn't believe how much coverage of Hitler's homes—and very favorable coverage—was out there. So, in LIFE, in Vogue, the New York Times, Saturday Review; I could go on and on. It was everywhere. It was even in something called the American Dog Kennel Gazette that had a very positive feature about Hitler as a dog owner.

ALEISA FISHMAN
Despina Stratigakos is an architectural historian at the University at Buffalo. Her recent book Hitler at Home examines the efforts of Hitler's interior designer Gerdy Troost to cultivate Hitler's image as both a refined statesman and a man of the people.

Welcome to Voices on Antisemitism, a podcast series from the United States Holocaust Memorial Museum made possible by generous support from the Elizabeth and Oliver Stanton Foundation. I'm Aleisa Fishman. Every month, we invite a guest to reflect about the many ways that antisemitism and hatred influence our world today. From Buffalo, here's Despina Stratigakos.

DESPINA STRATIGAKOS:
Hitler had three residences during the Third Reich. There was the Old Chancellery in Berlin; there was his apartment in Munich; and there was his mountain retreat that became known as the Berghof. All three residences were renovated in the mid-1930s by Gerdy Troost, who was Hitler's interior designer.

Already in the late 1920s, Hitler understood that he needed to shift his image, that he was having a hard time appealing to the middle classes and to female voters. And in 1932, in the midst of a very crucial election, the Nazi Party understood really the potential power of his domestic life. It was something that they had, until then, actually tried to keep out of public view, because he was a bachelor; he really didn't seem to have much in the way of family ties. For a long time, they really presented him as a firebrand, this orator who could move the masses. But in 1932, they realized that if they wanted to appeal to a broader constituency of voters, they had to change that. But, how do you get from someone who the Germans know is a rabid antisemite? He's known to be a traitor; he hangs out with this paramilitary gang of thugs. Germans know that about him and somehow by the mid-1930s he's transformed into this Bavarian gentleman, who is cultivated, who is perceived as a good neighbor, kind to children and old people. And I wondered how did we get there? And as I looked into it, I realized more and more how important his image in relation to his domestic spaces had been. Gerdy Troost created spaces that seemed so normal and that was really important. And there were journalists who were invited to come in and one reporter said, "This could be the home of a Glasgow businessman." And that was exactly the effect that they were going after.

The Berghof was not just a home. It was also where he ruled. And one of the objects in the house that ties together both the political and the domestic is the oversized globe that Charlie Chaplin would go on to parody in The Great Dictator. Gerdy Troost had actually intervened when it was being designed, and asked them to make it bigger. So together, the globe and the stand were five-feet-three-inches tall. Hitler was five-feet-six-inches tall. It stood right by this massive window in the great hall that overlooked the Alps and that was often photographed. He really made it a stage to get across a very positive kind of image, but also his message. His home in the mountains seemed to represent to the Germans this promised land of abundance and space and good food and blond children frolicking and the sun always shining. So it wasn't just about changing his image, but it was also about the message that he wanted to put out there to the Germans, and he did that in a way that, to an extent, no one had done before: to really make his private identity a part of his public image. And since then, I think that it's used all the time.

I sort of stumbled across Gerdy Troost's Nazi personnel files. And in the files were dozens and dozens of letters from Germans from all walks of life asking her for help. So, there were letters from Jews in concentration camps. There was a letter from a man who was gay, who had been interned. There was a letter from a mother who had lost two sons in the war, and was desperate because her third and only surviving son was being called up. And they were writing to her because everybody knew how close she was to Hitler. She was very prominent in the Third Reich. There are all kinds of photographs of her sitting beside him at cultural events. When he would come to Munich, often his first stop was her atelier. And as I was going through the file, there was such misery amidst the invoices for pieces of furniture and material. It was like the file itself posed the question to me what do Hitler's drapes have to do with the Holocaust? And it was trying to understand what the connection could be that eventually led me to write this book.