David Nirenberg is a professor of history at the University of Chicago. His book Anti-Judaism: The Western Tradition examines the durability and usage of anti-Jewish sentiments throughout history. 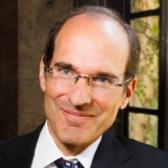 David Nirenberg is a professor of history at the University of Chicago. His book Anti-Judaism: The Western Tradition examines the durability and usage of anti-Jewish sentiments throughout history.

DAVID NIRENBERG:
Thinking about Jews and thinking about Judaism has been a very basic part about how the West has come to think about the world.

ALEISA FISHMAN:
David Nirenberg is a professor of history at the University of Chicago. His book Anti-Judaism: The Western Tradition examines the durability and usage of anti-Jewish sentiments throughout history.

Welcome to Voices on Antisemitism, a podcast series from the United States Holocaust Memorial Museum made possible by generous support from the Elizabeth and Oliver Stanton Foundation. I'm Aleisa Fishman. Every month, we invite a guest to reflect about the many ways that antisemitism and hatred influence our world today. From Chicago, here's David Nirenberg.

DAVID NIRENBERG:
Anti-Judaism is about how people in the world have come to think about their problems in terms of Judaism, even when those problems have nothing to do with Jews, even when there may have been no Jews living in that society for hundreds of years or, perhaps, ever. So it's very different from antisemitism in that I'm really not talking about how people act toward real Jews. Obviously, the way in which the world has come to use Judaism as a tool to think about itself affects how it then acts toward or thinks about real Jews, but this is a much vaster question. And it's a question which shows you how Christians, Muslims, Marxists, fascists—many different kinds of people—have come to characterize each other in terms of Judaism, even when none of them are what we would consider to be real Jews. What makes anti-Judaism such a powerful way of thinking about the world is that it can be applied to anybody.

Anti-Judaism is encoded in many of our most powerful religions. Both Christianity and Islam claim Judaism and the Jewish scriptural tradition as their base. And so Christianity has to show how its way of reading scripture is correct and the way of the Jews who didn't adopt Christianity was wrong. And Islam has to show how its way of reading scriptures was correct. So for both Islam and Christianity arguing about Judaism is a key to defining themselves. Am I being Christian or am I acting like a Jew? The same thing happens in Islam. Where, already in the earliest Islam, different groups of Muslims accused each other of being like the Jews and, in that sense, being bad Muslims. In our own society, for example, you can think about how all of the parties in conflicts in, say, Egypt or Syria or Iraq call each other Jews even though there are no Jews present.

We often think of the Nazis as antisemitic, and they certainly were that. But we can't really understand why their program had so much power—why so many millions of people accepted the claim that the dangers of the world in which they found themselves were best explained in terms of Judaism—without understanding how they'd been taught to think about the world in terms of anti-Judaism. Even amongst the Nazis, who were so effective in targeting real Jews, so to speak, for their murderous extermination, they also used anti-Judaism to target many people who weren't real Jews, like the de-Judaification of the university or the art exhibit of 1937 in which the Nazis tried to de-Judaize German art. If anti-Judaism were only about real Jews, it wouldn't have been able to mobilize millions, tens of millions, hundreds of millions of people in Europe to understand their challenges, their fears, in terms of the need to exterminate Judaism.

I know it might feel gloomy or depressing to think about how pervasive thinking in terms of Judaism is in the history of how we've learned to think about our world. On the other hand, I think it's really liberating to become aware of that pervasiveness, because it's only once we're aware of it that we can start to ask ourselves, "Wait a minute. Why am I thinking about the world this way? Is it because the world really is this way? Are Jews really the issue that I am concerned with, or is it because the critical concepts I'm deploying have taught me to think about this problem in terms of Judaism?" I think that once we become conscious about why we have these tendencies to think in these ways, we can develop approaches to help people realize the cost to their own political discourse, to their own ability to make their own countries better places.