Charles Small believes that scholars can play a critical role in combating antisemitism by helping human rights advocates and policy makers understand the long history and contemporary manifestations of the problem. 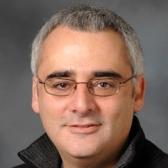 Charles Small believes that scholars can play a critical role in combating antisemitism by helping human rights advocates and policy makers understand the long history and contemporary manifestations of the problem.

CHARLES SMALL:
There seems to be an ignorance of the type of antisemitism which is becoming, in my opinion, a social movement, particularly in the Middle East. That the Arab-Israeli conflict has moved now, I would say, to a clash over religious ideology. And this ideological social movement, this radical Islamic movement—and we should say "radical Islamic movement" and not to conflate Islamic identity and blame all Muslims for antisemitism—but the radical form of Islamicism has at its core a hatred of the Jews.

DANIEL GREENE:
Yale University's Initiative for the Interdisciplinary Study of Antisemitism was founded on the belief that scholars can play a critical role in combating antisemitism. As director of the Initiative, Charles Small brings together academic specialists from many fields to examine the long history and contemporary manifestations of anti-Jewish prejudice. Small hopes that Yale's new effort, the first of its kind in North America, will help spur creative solutions to what he calls "the march of antisemitic hatred."

Welcome to Voices on Antisemitism, a free podcast series of the United States Holocaust Memorial Museum. I'm Daniel Greene. Every other week, we invite a guest to reflect about the many ways that antisemitism and hatred influence our world today. Here's political scientist Charles Small.

CHARLES SMALL:
The Iranian regime and its supporters, also Hezbollah, have repeatedly called for the annihilation of the State of Israel. And it just goes beyond the pale that one member of the United Nations can call for the destruction of another. And it's during a time, I think, of, you know, of globalization, of people and cultures coming together as never before. And at the same time, all the Middle Eastern countries together have the same gross national product as Spain, as one European country. So there's tremendous economic dislocation happening. And I think antisemitism, and the Jews and the Israelis and the Zionists, are used as scapegoats, almost in a classical sense.

And what's important I think for people in the West to realize, you know, you hear critics of Israel say often that they're not antisemitic, but they're anti-Zionist or they're anti-Israel. This social movement in the Middle East does not distinguish between "Israeli," "Jewish," or "Zionist." They use these terms interchangeably, and they use it in genocidal ways.

I know in the United States that the political culture is very much based on the First Amendment, and there is this sort of sacred, I think, value in the United States that all speech ought to be voiced and in the free market of ideas will be judged accordingly. And I think that's fine. But I respect in a way the Canadian and German political culture that there ought to be limits; that we don't have the right to incite violence against, particularly against identifiable groups, and particularly against groups that have suffered discrimination historically. That this is a very dangerous practice, and the repercussions of these practices is known historically to have caused death and destruction, and that as a democracy we must stop that from occurring.

We have responsibilities to one another, and every action we do has repercussions. And our inaction has powerful repercussions as well. And I think in this sort of struggle against bigotry and hatred, I think in a sense that we ought not to be so concerned about the actions of the few bad people. But what I'm also concerned about as well on an individual basis is the inaction of the vast majority of good people.

We really, I think collectively need to take action, we need to confront this hatred. And if we don't confront this hatred now, I think history teaches us that this will only become more powerful and more problematic in the future. And I think now that there must be, I would argue, a mass social movement of students and scholars regardless of our, if we're left wing or if we're right wing; that we can't tolerate this genocidal rhetoric, and that we should create a student movement. I think that it's not just a Jewish issue and it's not just an issue over antisemitism. It's greater than that. It's about stopping hatred.