As Chief of Police in Washington DC, Charles Ramsey developed a training program for law enforcement officers in conjunction with the United States Holocaust Memorial Museum and the Anti-Defamation League. Now in its eleventh year, the program examines the history of the Holocaust in order to help officers reflect on their personal and professional responsibilities. 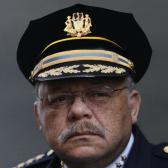 As Chief of Police in Washington DC, Charles Ramsey developed a training program for law enforcement officers in conjunction with the United States Holocaust Memorial Museum and the Anti-Defamation League. Now in its eleventh year, the program examines the history of the Holocaust in order to help officers reflect on their personal and professional responsibilities.

CHARLES RAMSEY:
What does it mean to be a police officer? What is it like to be a member of law enforcement in a democratic society, where you see your role as protecting the constitutional rights of people? And I don't think most police officers see themselves as protectors of the Constitution. They just simply see themselves as law enforcement officers; but not all laws are legitimate. And those are the kinds of serious questions that are raised when you take a look at what happened in Germany during World War II.

ALEISA FISHMAN:
As Chief of Police in Washington D.C., Charles Ramsey developed a training program for law enforcement officers in conjunction with the United States Holocaust Memorial Museum and the Anti-Defamation League. Now in its eleventh year, the program examines the history of the Holocaust in order to help officers reflect on their personal and professional responsibilities. It is an exercise in reflection that Ramsey has found useful in his own career and in his current post as Police Commissioner of Philadelphia.

Welcome to Voices on Antisemitism, a podcast series from the United States Holocaust Memorial Museum made possible by generous support from the Oliver and Elizabeth Stanton Foundation. I'm your host, Aleisa Fishman. Every month, we invite a guest to reflect about the many ways that antisemitism and hatred influence our world today. From Philadelphia, here's Charles Ramsey.

CHARLES RAMSEY:
In 1998, when I took over as Police Chief in Washington D.C., I was invited to visit the U.S. Holocaust Museum. And I was haunted by some of the images that I saw, but I wasn't quite sure what it was that really bothered me. And I came back a couple of days later, and when going through it a second time I quickly saw that it was the role of police in the Holocaust, which I was actually unaware of prior to my visit, that really was what was disturbing me. And the question then came: what it was that Germany, having been a democratic society, what happened? How did those police officers, that probably took an oath very similar to the one I took, how could they become part and parcel of something so horrible? And I thought then that if we brought police officers there, if we exposed them to what took place, if we had them see their role as protectors of constitutional rights of other individuals, that perhaps there are some valuable lessons that could be learned from the Holocaust experience. And we put together a curriculum that was later presented to recruits in the Metropolitan Police Department in Washington and has since expanded to more than 50,000 officers having gone through.

Basically, what I did was I finished my tour of the Museum and I just kind of thought about some of the current issues that were being dealt with at the moment by members of law enforcement. Again, this is all pre-9/11, and racial profiling was certainly the hot topic in law enforcement at the time. And it struck me when I looked at another picture of a man who had just been, you know, "liberated" and he's sitting outside of the barracks, and he's got a bowl of food of some kind, and he's looking at the camera. But when you looked at his eyes you could tell that he, you know, he didn't feel liberated at all, and he didn't really see the person taking the photograph as a protector. And what really struck me with that image was the fact that I've seen that look in the eyes of people in some communities that we serve; that as we drive through, we aren't seen as protectors either. And why is that? So these are outstanding questions that I wanted to find an answer to.

And I thought that a way of dealing with a very sensitive issue like racial profiling, like biased policing, would be coming at it from a real incident that took place, far enough away in history where the people in the room weren't really a part of it, so you don't have the immediate emotional defensiveness that takes place in a room when you start talking about current racial issues. By doing it this way, it catches everybody off guard. They're a little confused as to why they're there, but when we really start to get at the heart of the issues and start to see why people feel sometimes the way they feel—what the history of law enforcement, not just in America, is, but around the world, and some of the baggage that people carry with them when they look at us with some suspicion—then I think you can get legitimate dialogue without the confrontational incidents that may take place if you move too quickly into the topic.

It is difficult for police officers to rid themselves of bias. I mean, we see things and deal with things on the street on a regular basis that most people are never exposed to, thank God. And it's very difficult not to carry that around with you, but you have to fight against that. And that's a day-to-day struggle in some cases. But you just can't have a situation where you begin to label entire groups of individuals, or think that all young people are thugs and criminals, and make all these kinds of broad conclusions about individuals based on a few experiences that you've had. You just can't afford to do that, because it's very easy for your values to erode over time. And in a sense that's what happened in Germany over about a ten-year period or so. You know, the values and the principles began to erode over time, and it led to the ultimate horror. Our oath has to stand for something, and if it doesn't stand for anything then there are some severe consequences. And I think that officers need to understand why they exist as an organization, as a profession. And I can't overstate that.