Surviving the Holocaust by pretending to be a Christian Pole, Betty Lauer gained a unique perspective on the step-by-step process of dehumanization that fueled it. 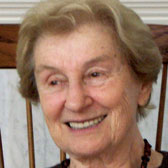 Surviving the Holocaust by pretending to be a Christian Pole, Betty Lauer gained a unique perspective on the step-by-step process of dehumanization that fueled it.

ALEISA FISHMAN:
Each transformation of her name marks a moment of adaptation in Betty Lauer's life--from a young German Jew in the 1930s, to a bleached-blond concealing her Jewish identity from the Nazis in Poland, to an American immigrant reunited with her father after the war. Through these experiences, Lauer gained a unique perspective on the Holocaust and the step-by-step process of dehumanization that fueled it.

Welcome to Voices on Antisemitism, a podcast series from the United States Holocaust Memorial Museum made possible by generous support from the Elizabeth and Oliver Stanton Foundation. I'm Aleisa Fishman. Every month, we invite a guest to reflect about the many ways that antisemitism and hatred influence our world today. From her home in Vermont, here's Betty Lauer.

BETTY LAUER:
I was born in Germany, 1926. I lived there until I was twelve years old. Of course, there was the persecution. And at that particular time, all they wanted was the Jews should leave Germany, but nobody wanted us. America didn't want too many of us, and the British mandate didn't let the Jews into Palestine. But my father managed to get out. It's complicated, but he managed to get out and get to America. And then he sent us the papers, but in the meantime, they had this Aktion that they expelled all these Jews from Germany into Poland. They drove us by truck. And there was this little brook, and they threw planks across the brook, and they said, "If you cross the brook, you will be in Poland. And whoever turns back is going to be shot." And there were, I don't know, a couple of hundred people; they had to walk over that plank. And…so then I was in Poland, yes.

The Nazis, after the liquidations of the ghetto, they were literally hunting Jews; because it was their motto that not one Jew may survive. So I was working at a factory, and I felt myself constantly watched. I went to church with my fellow workers, and they watched me, whether I was going to Confession first, and Communion. And there was another woman, and they were constantly making remarks that they think she is "other." And they decided that they were going to follow her, and if they find out where she lives then they could register at the Gestapo and somebody will come for her. And they absolutely persuaded me that I have to come with them. And I did. And when we got into the second streetcar, I said to them, "This is wrong. If the Germans want to find the Jews, let them do it. But we as Christians, we shouldn't participate in this." And they let go. And I think—I'd like to think—that I saved her life, but I've never seen her afterwards again. But anyway, shortly thereafter, maybe two days later, the forelady called me in, and she said that they have rumors that I'm Jewish. And I said, "No. I don't know; why?" And she says, "Well, you know, we can't take any chances. And there are rumors. Are you Jewish?" I said, "No!" And she said to me, "I believe you. But please don't come anymore." So in other words, she didn't believe me, and she didn't want to jeopardize herself and me anymore.

This identity business, I'm not bothered by this. I knew exactly who I was, but I had to keep that deeply hidden and lead that other life. And I think having come across, occasionally, some people that were decent—and even if they couldn't help actually, they weren't going to harm me—that already was a victory that held me up. But it started with demonizing. And the demonization goes on and on and on, and all of a sudden the "other" becomes the "other" that's not human, and then it becomes the "other" that you can just destroy in gas chambers. But the only thing that I thought, I really thought, that after what I went through, and after what I had seen, it'll never happen again. But that's not the way we are going.