Essayist and philosopher Alain Finkielkraut has become wary of contemporary antisemitism that casts Jews in the role of oppressor. 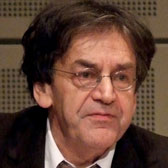 Essayist and philosopher Alain Finkielkraut has become wary of contemporary antisemitism that casts Jews in the role of oppressor.

Welcome to Voices on Antisemitism, a free podcast series of the United States Holocaust Memorial Museum made possible by generous support from the Oliver and Elizabeth Stanton Foundation. I'm Daniel Greene. Every other week, we invite a guest to reflect about the many ways that antisemitism and hatred influence our world today. Here's essayist and philosopher, Alain Finkielkraut.

ALAIN FINKIELKRAUT:
Israel's occupation stirs criticism. But it's not only Israeli occupation anymore. It's the idea that this state was a mistake. It should not have been built in the first place. And there is also the idea in France and in Europe that we are paying for that mistake. If Israel did not exist, we wouldn't have Islamic terrorism, and life would be easier for all of us.

I can hear their anger—at the Americans, that's for sure. But mostly at Israel. Why should we go into war for this country which is occupying another and maybe should not exist?

And that's what permits more and more people to say: "We should not care for Israel's existence." And that's I think the predicament of the Jews today.

You know, you're safe when you're a Jew in France—you have your profession, your family, everything. But there is a feeling of loneliness, a feeling of isolation, because the Jews cannot share their concern for Israel with the majority of the people. And I think it's very sad.

Remembrance of the Holocaust is just a mitzvah. It's not only a Jewish mitzvah. It's a duty. You have to add one narrative to another all the time. It's an endless task. And we have to do it.

But on the other hand, we shouldn't think that it will help to fight antisemitism. As an instrument, it became a bad instrument. Because either people will say in the name of the Holocaust, to the Jews: "Behave yourself." Or they will develop some kind of resentment, you know. Especially in France, the resentment of the Africans, the resentment of the Arabs: "Enough! We deserve our own Holocaust. We have colonialism, slave trade."

And they want the teachers to teach these parts of history as a holocaust, which they were not. But when you say colonialism is not a holocaust, as a Jew, you're accused of selfishness. You want to keep the cake. And you're asked to share the cake of the Holocaust. So, you know, everybody is entitled to his morceau de gateau, to his part of the cake. And I see this resentment mounting. And people feel guilty. The Jews feel guilty. They say, "Yes, yes, we have to make room." And then the teachers feel also guilty or angered at the Jews. "Why should we focus only on the Holocaust?"

I mean, the Jews are now victims of their success because yes, they were "the other" for a long time and they paid a price. But then, they paid such a price that Europe, to apologize, rehabilitated the other. But then there was the idea, they don't live up to their own heritage. They are not "the other" anymore. The other was the wandering Jew, the un-sovereign, the powerless. And look at the Jews. They are wealthy. And they all focus on Israel, which is a state which defends it's sovereignty, which defends it's borders. So it's a counterexample of "the other." It's as if Jews had betrayed their otherness. So after paying for being "the other," they are now paying for betraying their otherness.