Outreach in the Middle East and North Africa

The Museum’s educational efforts seek to promote sustainable teaching and learning about the Holocaust and genocide in a region where accurate information about the Holocaust is generally difficult to find and often politicized. The Museum works with partners to reach educators, schools, universities, and religious and civil society leaders with programming in several languages. Learn more about the Museum’s work in the Middle East and North Africa below. 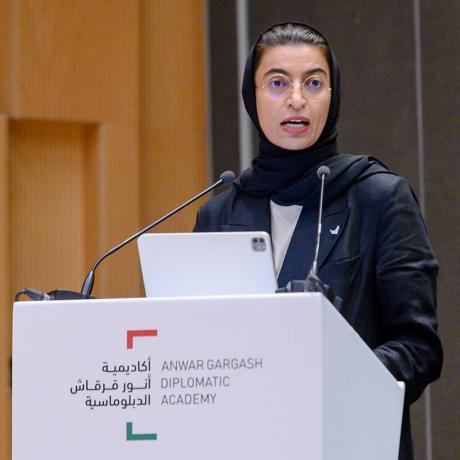 Her Excellency, Noura Al Kaabi, Minister of Culture and Youth for the United Arab Emirates in Abu Dhabi on January 28, 2022. —Photo provided by AGDA 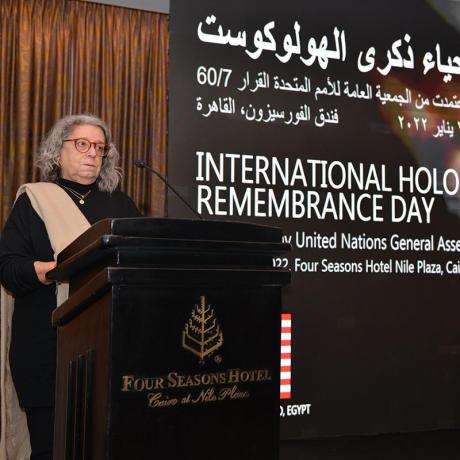 January 27 is designated by the United Nations General Assembly as International Holocaust Remembrance Day (IHRD), which marks the anniversary of the liberation of Auschwitz-Birkenau, to honor the six million Jewish victims of the Holocaust and millions of other victims of Nazism. In January 2022, the Museum co-sponsored groundbreaking IHRD commemorations in Abu Dhabi and Cairo. The events recognized Arabs who confronted intolerance and hatred by helping Jews during World War II. The event in Abu Dhabi was co-sponsored with the Emirati Ministry of Culture and Youth, the Anwar Gargash Diplomatic Academy, and the U.S. Embassy in Abu Dhabi. The event in Cairo was co-sponsored with the U.S. Embassy there.

Download poster sets, watch films, and discover more ways to learn about the Holocaust and antisemitsm.

Mimouna is a non-governmental organization started by primarily Muslim university students dedicated to preserving Moroccan Jewish heritage and culture. It has organized several workshops with the Museum in Morocco for students, educators, and social media influencers. These workshops provide participants with information on Nazi racial ideology, propaganda, and totalitarianism. The Museum and Mimouna produced the first Arabic-language guide on Morocco and the Holocaust and have jointly promoted a Museum produced short animated film in Arabic on Nazi racial ideology.

The Museum and the Laboratory of Heritage at Manouba University, and other institutions in Tunisia, have developed a project on the history of Nazi propaganda linked to the exhibition State of Deception: The Power of Nazi Propaganda, initially created by the Museum. The project also addresses the history of Tunisia during the time of the German occupation and the history of the Tunisian Jewish community through exhibitions, film screenings and book presentations, as well as workshops for educators and students.

The Museum partners with Iranian-Canadian journalist and filmmaker Maziar Bahari and IranWire.com, to create and distribute Persian-language multimedia content online and through social media. These efforts seek to counteract official Holocaust denial, antisemitic rhetoric, and restrictions on accurate information about the Holocaust.

Recently, the Museum and IranWire launched The Sardari Project: Iran and the Holocaust to engage with young Iranians about the history and lessons of the Holocaust, the dangers of unchecked hatreds, conspiracy theories, propaganda, and more. IranWire makes available content related to these themes to an audience of young Iranians seeking information on the Holocaust and related topics.

Past projects have included:

The Museum has also been a leading voice in opposition to Iranian government efforts to deny, distort and mock the Holocaust.

The Foundation for Civilian and Ecological Rights, Turkey (SEHAK)

The Museum partnered with SEHAK to strengthen the resources available for Turkish educators on the Holocaust, including an online resource in Turkish, a Holocaust timeline activity, and a translation of the Museum’s Justice and Accountability video.