In 1940, Tracy Strong left the relative safety of America to help students displaced by the war in Europe to continue their studies. While uncomfortable with the title "hero," Strong's efforts to sustain an educational safe haven ultimately proved life saving for many young Jews. 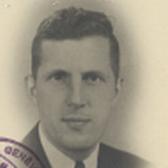 In 1940, Tracy Strong left the relative safety of America to help students displaced by the war in Europe to continue their studies. While uncomfortable with the title "hero," Strong's efforts to sustain an educational safe haven ultimately proved life saving for many young Jews.

TRACY STRONG, JR:
I don't think anybody thinks of themselves as a hero—it's kind of a false-nomer, because I had a job to do. But you feel good that you're able to do something to help people.

ALEISA FISHMAN:
In 1940, Tracy Strong left the relative safety of America to help students displaced by the war in Europe to continue their studies. While uncomfortable with the title "hero," Strong's efforts to sustain an educational safe haven ultimately proved life saving for many young Jews.

Welcome to Voices on Antisemitism, a podcast series from the United States Holocaust Memorial Museum made possible by generous support from the Oliver and Elizabeth Stanton Foundation. I'm your host, Aleisa Fishman. Every other week, we invite a guest to reflect about the many ways that antisemitism and hatred influence our world today. At 93 years old, here's Tracy Strong.

TRACY STRONG, JR:
I'm Tracy Strong, born in Seattle, WA, September 4th, 1915. I went to Oberlin College and then to Yale Divinity School, and went overseas. I was working out of Geneva, Switzerland, but living in France a good deal of the time, for the European Student Relief Fund. And we were trying to do something for students, who wanted to continue their studies. So we found an old hotel in Le Chambon-sur-Lignon, which we could rent, and we had committees throughout France looking for students who needed help. Most of the students were Jewish, some in the camps, that is, the internment camps. And so eventually we had a total of 79 students go through the Maison des Roches. At one time, the Vichy government did give permission for anybody to leave the camp who could prove that he had the means to live outside on his own, and we could provide that because we had this place at les Roches. So it was not easy, but it was possible to get a permit for them to leave.

There were five or six students I knew particularly well who tried to get into Switzerland once with help from young Frenchmen who knew the mountain passes. The first time, they were turned back by the Swiss, and the second time we got them visas. It wasn't easy; the Swiss were very reluctant to give out visas. But we were located in Geneva—our headquarters were—and we had people there who knew people in the government and could intervene. Sometimes it worked, sometimes not. But eventually, later on in '42, the Germans, they wanted all the Jews back to Germany, even though they had sent them there to southern France—about 100,000 Jews were sent to southern France. And then all of the sudden, they changed their mind and wanted them all back. They were taken back, and sent to places like Auschwitz. So we saved their lives from that point of view, that they were not in the camp at the time the convoy was leaving.

I grew up in a very spiritual, religious family. We always went to my grandfather's church. And my father was a YMCA worker. Even though he was not a minister, he was a very religious person. So I think that all had an influence on me, to do something in a social manner, where you could help people. That's what I wanted to do with my life. So it felt very good when you were able to succeed at it and to get some students out. And even though you can't correct the whole major situation, you can do something to help individuals.