In November 1938, the Nazis destroyed Jewish homes, businesses, and synagogues in an event known as Kristallnacht—the "Night of Broken Glass." Susan Warsinger was an eyewitness to that terrifying event. 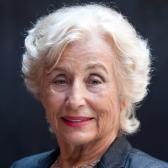 In November 1938, the Nazis destroyed Jewish homes, businesses, and synagogues in an event known as Kristallnacht—the "Night of Broken Glass." Susan Warsinger was an eyewitness to that terrifying event.

DANIEL GREENE:
In November 1938, the Nazis unleashed a two-day wave of riots across Germany. Thousands of Jewish homes, businesses, and synagogues were destroyed in an event that came to be called Kristallnacht—the "Night of Broken Glass."

During these Days of Remembrance 2008, the U.S. Holocaust Memorial Museum has designated Kristallnacht the focus of commemoration. As part of the Museum's initiative: "Do Not Stand Silent: Remembering Kristallnacht" today we bring you testimony from Susan Warsinger, an eyewitness to that terrifying event.

Welcome to Voices on Antisemitism, a free podcast series of the United States Holocaust Memorial Museum made possible by generous support from the Oliver and Elizabeth Stanton Foundation. I'm Daniel Greene. Every other week, we invite a guest to reflect about the many ways that antisemitism and hatred influence our world today. Here is Susan Warsinger, who was nine years old on the Night of Broken Glass.

SUSAN WARSINGER:
It was November the 10th, 1938, and my brother and I were sleeping in our bedroom and all of a sudden some bricks and rocks were being thrown through our bedroom window. And my brother, who has always been braver, looked outside and he saw that it was the people from our town that were throwing the bricks and the rocks through the window. And he also saw the civil policeman standing at the edge of the crowd and he had his arms folded and he did not do anything about what was happening. He just watched and the people of the town had uprooted a telephone pole and they gouged the door down. They pushed at the door until the door fell on the floor and the glass splattered all over.

We lived on the first floor and the rabbi of the town lived on the second floor. And I saw the rabbi standing on his veranda and there were two Nazi officers standing next to him holding him by the arm, and a third one held him by the beard and had a scissor in his hand. And he cut off his beard. So we rushed across the hall to our parents' bedroom, and then my parents told us not to worry. We were going to go up to the attic and hide in the attic until this whole thing blew over.

They seemed to try to protect us all the time and not tell us what was going on. But gradually, you know, even young children find out on their own.

My mother must have been feeling terrible because she didn't know whether she was going to see her children again. And I didn't really understand this until I had my own children, and the idea came to me that if I had to send mine away and not know whether I was ever going to see them again, what a terrible feeling it must have been for my mother.

DANIEL GREENE:
Susan Warsinger, her two brothers, and her parents all survived the Holocaust. After being separated for nearly three years, they were reunited in the United States in 1941. This interview was recorded at the Holocaust Memorial Museum in Washington DC, where Warsinger has volunteered, and shared her story, for more than a decade.

Voices on Antisemitism is a free podcast series of the United States Holocaust Memorial Museum. Join us every other week to hear a new perspective on the continuing threat of antisemitism in our world today. We would appreciate your feedback on this series. Please visit our website, www.ushmm.org.