Sara Lipton is a professor of history at SUNY Stony Brook. In her book Dark Mirror: The Medieval Origins of Anti-Jewish Iconography, Lipton traces the development and evolution of antisemitic images in Christian art. She explores the way negative imagery can actually fuel a cultural shift toward hatred. 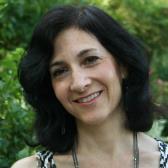 Sara Lipton is a professor of history at SUNY Stony Brook. In her book Dark Mirror: The Medieval Origins of Anti-Jewish Iconography, Lipton traces the development and evolution of antisemitic images in Christian art. She explores the way negative imagery can actually fuel a cultural shift toward hatred.

SARA LIPTON:
Images can without a doubt be a form of hate speech. When we think about our own world, we have to acknowledge the power that visual imagery can have. And I do believe the same was very true in the Middle Ages.

ALEISA FISHMAN:
Sara Lipton is a professor of history at SUNY Stony Brook. In her book Dark Mirror: The Medieval Origins of Anti-Jewish Iconography, Lipton traces the development and evolution of antisemitic images in Christian art. She explores the way negative imagery can actually fuel a cultural shift toward hatred.

Welcome to Voices on Antisemitism, a podcast series from the United States Holocaust Memorial Museum made possible by generous support from the Elizabeth and Oliver Stanton Foundation. I’m Aleisa Fishman. Every month, we invite a guest to reflect about the many ways that antisemitism and hatred influence our world today. From New York City, here’s Sara Lipton.

SARA LIPTON:
For pretty much the whole first half of the Middle Ages, you could not tell a Jewish person visually by looking at one in Medieval Christian art. They didn’t have any identifying physiognomic features, facial features, clothing of any kind. You really had to just know from the context who these figures were. It doesn’t mean that Christianity didn’t have any negative ideas about Jews or Judaism. But these negative ideas, or critical theology, were simply not reflected in art at all.

This begins to change sometime after the year 1000. One manuscript in particular begins to show some Jewish figures wearing pointed hats, but those pointed hats really just mean antiquity, oldness, ancient authority. They were not at all intended to be negative signs. The same pointed hats were shown on the heads of the three magi, who gave gifts to Jesus when he was born. So, the very first appearance of the so-called Jewish sign was not specifically Jewish and it was certainly not negative, but once that sign is introduced, people stopped remembering the original association with antique wisdom and just started thinking “Hebrew,” and then they started thinking “Jew.”

And by about the year 1250 is when the kind of facial stereotype of the Jew, as the modern world came to know it, was developed. It was then that they started showing Jews in a profile view with a big hooked nose, with a kind of a pointed chin or a goatee beard, often with a certain kind of sneer or aggressive expression on the face. And this stereotype became so fixed that artists began to realize they didn’t need to label the figure a Jew anymore because people knew this is the “Jewish face.” So that when artists wanted to illustrate Dickens’s Oliver Twist, they made Fagin look like that Medieval Jewish face. When the Nazis wanted to create anti-Jewish posters, they gave the figures on those posters that same face.

Medieval anti-Jewish art did not primarily reflect pre-existing ideas or negative attitudes towards Jews. But it, in fact, generated much more negative attitudes towards Jews than pre-existed the artworks themselves. Frequently the images come first, and the rhetoric comes second. Sometimes they seem to coincide. I picture the way this mutual influence happening as a kind of a feedback loop. There would be a negative image, that would generate negative rhetoric, that would then generate even more negative imagery. And it’s that combination of visual and verbal rhetoric that seemed to create the intense hatred and then eventually the violence. Some of the very first anti-Jewish laws that were passed were these laws about mandating distinguishing clothing or identifying badges. And clearly the idea that you have to be able to look at a Jew and know one when you see one came to be levied in real life, but the art preceded them. And there are several other examples of this, of ideas being worked through in art and then filtering their way into actual society later on.

Art can change the way people look at the world. Until Medieval Christian artists started drawing physiognomically realistic people, and at the same time using those realistic features to try and say something about characters’ moral and spiritual worth, so far as we know, people did not make judgments on the basis of facial features or physiognomy. Scholars have scoured Medieval and ancient writings from before the year 1200 looking for physical descriptions and they are very, very, very hard to find. But once artists start creating the idea that skin color has meaning, or that facial features have meaning people started looking at their neighbor’s skin color and people started looking at their neighbor’s facial features and they started jumping to conclusions about those people’s qualities.