Sam Ponczak was only two years old when World War II broke out in Poland, and for many years he didn’t think of himself as a Holocaust survivor. But later in life, when asked to speak to schoolchildren about his experiences, Ponczak began to embrace his story of survival as part of the important narrative of the Holocaust. 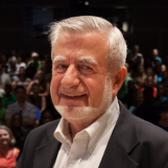 Sam Ponczak was only two years old when World War II broke out in Poland, and for many years he didn’t think of himself as a Holocaust survivor. But later in life, when asked to speak to schoolchildren about his experiences, Ponczak began to embrace his story of survival as part of the important narrative of the Holocaust.

ALEISA FISHMAN:
Sam Ponczak was only two years old when World War II broke out in Poland, and he didn’t think of himself as a Holocaust survivor. But later in life, when asked to speak to schoolchildren about his experiences, Ponczak began to embrace his own story of survival as part of the important narrative of the Holocaust.

Welcome to Voices on Antisemitism, a podcast series from the United States Holocaust Memorial Museum made possible by generous support from the Elizabeth and Oliver Stanton Foundation. I’m Aleisa Fishman. Every month, we invite a guest to reflect about the many ways that antisemitism and hatred influence our world today. Here’s Holocaust survivor Sam Ponczak.

SAM PONCZAK:
I was born in Poland and lived for a short time in the Warsaw Ghetto. My father was a tailor. He came from a small shtetl in Poland. And my mother, she was a seamstress. You know, I was trying to put myself in their shoes, a young couple with a kid, “What do we do? Where do we go?” My father, he was in the trade unions, and aware of the political situation, what was going on, and he said, “Let’s run east.”

And the River Bug became the border between the Germans and the Soviets. And my mother crossed the river when it was frozen at night. It must have been a 1940 winter. And she was carrying me on her back. And apparently, she was slipping, sliding, and falling. And I had a ball; I thought it was very funny. So I was laughing my head off in the middle of the night and she wanted apparently to shush me down, so she gave me some pictures to hold. By the time she made it to the other side, she was telling me, “You tore all of these pictures up.” What can I tell you? So I carry that guilt for the rest of my life. And then, of course, we were caught. There were dogs. Thank God they didn’t shoot at us. And the next thing being a Soviet labor camp in Siberia. So we were in Siberia for a few years. And then we were sent to Ukraine, spent about a year in Ukraine, and then we returned to Poland. Primarily my parents wanted to know who survived. That was their reason for going.

So we came to Poland. In February of 1946, I remember, we rode into this town, which still had the German name at the train station. It was called Reichenbach. Those who settled there were either those who came from Soviet Russia, or those who survived the concentration camps, or those who survived hiding out on the Aryan side, or those who came simply by hiding in the forest in some God-forsaken hole in Poland. We as a family survived, which was a rarity after the war. There were single women, single men; not too many kids. But I remember there was a Jewish committee in town, and every time I used to walk by it was plastered with pages of papers, handwritten notes, saying, “Have you seen Simcha or Chaim, my uncle, or do you know Such-and-Such?” Now, my mother was a very friendly woman and she had a home with a family, so she invited, or the word got out, “You can go to Jacob’s or Sally’s house and have a drink or talk.” And they wanted to see people and hear people because they were looking themselves for family.

In 1983, there was a big gathering of Holocaust survivors on the Washington Mall. And I, already I was married, I had two small kids, my parents were alive, we went to this big gathering. And then a few days later, a friend of mine called me and said, “Sam, you know what? We have this old-timer Holocaust survivor, and he normally goes and talks to schools and young people, but he got sick, and would you step in for him?” And I said, “Jacques, you know I don’t consider myself a Holocaust survivor.” I considered my parents, people who were in the concentration camps, but I was a kid, what did I know? And he smartly said, “Well, you know, you are here because you survived the Holocaust.” And I spent a whole night thinking about it, so that was the moment that I accepted the fact that I’m a Holocaust survivor.

What I didn’t tell you was that when those people used to come to my parents’ apartment in the town in Poland to talk about what happened to them etcetera, I remember one of them who survived Auschwitz. He used to tell, that the groups of Jews that were that day scheduled to be killed, invariably there was other groups of Jews who weren’t doomed that day, and they would yell or scream to those: “Remember us! Tell what happened to us, remember us!” That was…I consider it their dying wish. And I remember that fellow, and he would say that many, many times, I mean it was something that obviously affected him. Now, fast forward, when I retired, I decided to volunteer at the Holocaust Museum. And then after a while you get tired of telling the same story, I asked myself what’s the point? But then I realized that there are constantly new faces, I’m talking to a new group of people, and that’s what’s kept me going, and that’s what is important to me.