Ruth Bader Ginsburg is the second woman to serve on the US Supreme Court. Here, she reflects on her own Jewish identity, free speech, and antisemitism today. 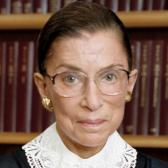 Ruth Bader Ginsburg is the second woman to serve on the US Supreme Court. Here, she reflects on her own Jewish identity, free speech, and antisemitism today.

RUTH BADER GINSBURG:
Growing up as I did, in the shadow of World War II—World War II ended when I was 13—one could not help but be painfully aware of the antisemitism that existed in our world.

DANIEL GREENE:
As an associate justice of the United States Supreme Court, Ruth Bader Ginsburg is entrusted to interpret the rule of law and protect the freedoms guaranteed by the Constitution. As one of few Jews and even fewer women to enter the legal profession in the 1950s, Justice Ginsburg has seen these freedoms tested firsthand. Still, as the daughter of immigrants, now seated on the highest court in the land, her faith in democracy endures.

Welcome to Voices on Antisemitism, a free podcast series of the United States Holocaust Memorial Museum. I'm Daniel Greene. Every other week, we invite a guest to reflect about the many ways that antisemitism and hatred influence our world today. Here's Supreme Court Justice Ruth Bader Ginsburg.

RUTH BADER GINSBURG:
I had the good fortune of being a Jew born in the United States. Our parents, one of whom came from Odessa—an area where the Jews were fearful of pogroms. I might not have been here—I more than likely would not have survived the Holocaust if my mother's family had remained in Austria. So, that's what I mean by my great good fortune to be in the United States, where, I think, more than any other place, despite the existence of antisemitism, Jews can feel free to live their lives as they will, to think as they choose.

And for me, I graduated from high school in 1950. My college years were the heyday of Senator Joseph McCarthy, who was looking for Communists in every closet. And I came to see that there were brave people standing up for the most fundamental values of the United States, that is, the right to think and speak freely and without fear that you would be punished for your ideas.

After World War II, many nations came to appreciate that elected representatives can't necessarily be trusted to uphold fundamental human rights. And so, countries began to do what the United States had been doing since the beginning. That is, courts interpreting a higher law. In our case, our Constitution and Bill of Rights. In the case of Europe, the new constitutions—the post-World War II constitutions that have similar guarantees of freedom of speech, freedom of religion. And separate tribunals—constitutional courts—began to engage in that business. It's just one more check against the return of an oppressive government.

But, today, there is much cause to be concerned. We can see it right now when the leader of Iran speaks about if there was a Holocaust. If there was one, then why didn't Germany create a special state for the Jews? And there are some people in the United States who are buying that kind of propaganda.

Do I think it should be a crime to deny the Holocaust? That is a very difficult question. What's right for one society is not necessarily right for another. And given the history of what went on in Germany—that this most civilized nation succumbed to the worst inhumanity—it may be that for Germany such a law is appropriate. In the United States, I still believe that the way to fight bad speech is not to ban it, but to fight it with true speech. To use the opportunity to educate people unto the falsehoods that others are speaking, but not to close down the right to speak. That's much too precious.