Rex Bloomstein has made many films about Jewish history and the Holocaust, including perhaps the best-known film on antisemitism, The Longest Hatred. Bloomstein's recent film, KZ, presents a modern look at the legacy of the Holocaust. 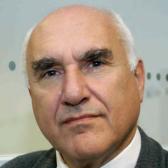 Rex Bloomstein has made many films about Jewish history and the Holocaust, including perhaps the best-known film on antisemitism, The Longest Hatred. Bloomstein's recent film, KZ, presents a modern look at the legacy of the Holocaust.

REX BLOOMSTEIN:
There are many questions about representing a site of mass murder. Do you make them easy to visit? Do you allow people to walk around with ice cream? Do you build or rebuild or reconstruct? Do you open yourself up to revisionists, saying these places never existed: "Look what they're doing to them." Life has to go on. Does it? It's not an easy question, and it's one which we have to deal with.

ALEISA FISHMAN:
Rex Bloomstein has made many films about Jewish history and the Holocaust, including perhaps the best-known film on antisemitism, The Longest Hatred. Bloomstein's recent film, KZ, presents a modern look at the legacy of the Holocaust. The film explores Austria's Mauthausen concentration camp through the eyes of tourists and local residents, and raises important questions about the preservation and presentation of Holocaust history.

Welcome to Voices on Antisemitism, a podcast series from the United States Holocaust Memorial Museum made possible by generous support from the Oliver and Elizabeth Stanton Foundation. I'm Aleisa Fishman. Every month, we invite a guest to reflect about the many ways that antisemitism and hatred influence our world today. From London, England, here's Rex Bloomstein.

REX BLOOMSTEIN:
I'm a documentary filmmaker and have been for many, many years. I have explored human rights, crime and punishment, antisemitism, and Jewish themes, and I'm still continuing to grapple with the profundities of the subject.

KZ is the latest film I have made on the Shoah, on the Holocaust. And it is a film that in a sense presages a future when there are no survivors, when all there is left is film. And in terms of all the films I've made, there is perhaps a conventional approach: the use of archive footage of survivors, of narration, of historians; the use of music; possibly dramatic reconstructions with actors. But as I've come to make these films, I've deliberately attempted to simplify what is being presented, to get to the essence, if you like. And what I mean by that is that I decided not to use these elements. I decided in the end, I couldn't even use survivors.

So KZ someone has described as the first post-modern Holocaust documentary, whatever that means. But I think it…what it has done is made us look at the subject in a different way. It's set in the landscape of the concentration camp. But it is essentially about us, about how we react, and how we deal with, how we respond to the massive atrocities that the Holocaust reveals.

How can it not be important to make sure that future generations know about this incredible event in which millions died so tragically? We all end up as tourists; terrible as that sounds. That is all we can do in the twenty-first century, is visit such places. But what does it mean to visit such places? What do we get from it? How real is this history? So when people cycle through the streets, they're cycling over the remains of what happened there. And what happened there frankly should never be forgotten.