At the age of 50, Rabbi Gila Ruskin left her pulpit position to teach Jewish studies at an urban-Baltimore Catholic school with a historically African American student body. The experience led Ruskin to appreciate the many ways that Jews and African Americans can come together through a shared history of oppression and, she says, a commitment to prophetic ideals. 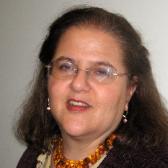 At the age of 50, Rabbi Gila Ruskin left her pulpit position to teach Jewish studies at an urban-Baltimore Catholic school with a historically African American student body. The experience led Ruskin to appreciate the many ways that Jews and African Americans can come together through a shared history of oppression and, she says, a commitment to prophetic ideals.

ALEISA FISHMAN:
At the age of 50, Rabbi Gila Ruskin left her pulpit position to teach Jewish studies at an urban-Baltimore Catholic school with a historically African American student body. The experience led Ruskin to appreciate the many ways that Jews and African Americans can come together through a shared history of oppression and, she says, a commitment to prophetic ideals.

Welcome to Voices on Antisemitism, a podcast series from the United States Holocaust Memorial Museum made possible by generous support from the Oliver and Elizabeth Stanton Foundation. I'm your host, Aleisa Fishman. Every month, we invite a guest to reflect about the many ways that antisemitism and hatred influence our world today. From Baltimore, Maryland, here's Rabbi Gila Ruskin.

RABBI GILA RUSKIN:
I had been a congregational rabbi here in Baltimore for 15 years and wanted a new experience, something challenging and different. So I left the congregation. And there is a school in downtown Baltimore called St. Frances Academy. And it's a Catholic school. The population of students is almost exclusively African American. It started out as a school to teach slaves to read—illegally—so it's been around since 1823. Anyway, they have a religion requirement. And I taught 11th grade, what they call "Jewish studies."

So my job was to teach about the Jewish view of the Bible, Jewish culture—so I taught them all about the holidays. We sang songs. Every Friday we lit candles, we had grape juice, we had a snack to welcome Shabbat. And to this day, I have a lot of Facebook friends who are former students of mine, and on Fridays a lot of them still post to me: "Shabbat Shalom, Rabbi."

We were involved in a program where we matched up a group of 20 of our kids and 20 kids from a Jewish school. And they had all kinds of activities together, encounters, educational things, but mostly ways to get to know each other. And I remember this one boy—this will always stay with me. He's big and brawny. And he was a poet—I knew him well, because he was in my creative writing class—a real gentle, poetic soul. And the kids were talking about appearance, and how people judge sometimes by appearance and don't take the time to get to know you. And he—it was so poignant what he said—he said, "You know, when I walk down the street, people cross the street to get away from me." And he said that that has such a profound effect on his identity and feeling so isolated and alone in the world. And the kids, the Jewish kids, really responded to that, you know.

The Black kids, the African American kids, had a lot of prejudice against the Jewish kids. They talked about all Jews being rich of course and, you know, that whole thing. But a lot of their common experience was one of—not persecution exactly—but prejudice, I would say. They realized that they had something in common when at first it seemed like they didn't, other than maybe they listen to the same music, that kind of thing.

Some of them, because of the fact that St. Frances was a really special…is a very special kind of school, come from all over Baltimore. So some of them were taking one, two, three buses to school and many of them would get beat up on the buses, because they were wearing school uniforms, and taunted by the kids their age who had dropped out of school. Many of their best friends were now into the drug world. And there was that lure all the time. And that was certainly something I learned, is what it was like to have those kinds of pressures on them. The other thing is that these kids deal with violent death. It's like, in their world all the time. They all have family members, friends, neighbors who have been shot. All, without exception. And it was something they all had to deal with in one way or another.

So when we did study the Holocaust at the end of the year, I brought in several Holocaust survivors to speak with them. And they responded to these people with their whole hearts. I mean, they identified with them to such a great extent. Someone in the class would always end up saying, "If you could make it, I can." In one way or another, that was their response to these people who would come in and tell the story about "When I was your age I was in the forest, trying to run away from the Nazis" or "When I was your age I was in a concentration camp." You know, they would say that to the kids. And I think all kids respond to that, but these kids in particular, some of whom had very difficult lives, saw them really as role models and inspiring to them.

And I arranged a trip for them, a field trip for them, to the Holocaust Museum, which was a major event during the year. But the way that I focused on it with them is identity, and what parts of your identity can you never lose, and which parts of your identity someone can take away from you. And what do you do with what's left, after loss? Because these kids have tons of loss, as I said, lots of shooting deaths, people who become drug addicts. They lose a lot of people in their lives, and they lose a lot of identity pieces in their lives. So we talked about this, you know, what is your core identity? What can people not take away from you? We spent a lot of time talking about bystander behavior in the Holocaust, because that's such a big issue in their lives, you know, the whole "don't snitch" thing. And we talked about the Holocaust, and what if no one had snitched? And what if this? What if that? So they really did identify with the Holocaust a great deal. They knew that it wasn't a holocaust they were living through as African American kids in America, but there were elements of it that just resonated with them.

Right now I have a totally different kind of a job. I'm working as a rabbi of a congregation in a small town, in a county where there's very few Jews. It's north of Baltimore, 40 minutes from my house. It's a totally different environment, of course, than urban Baltimore. But last year for Martin Luther King Day, I decided that our congregation should match up with an African American congregation and observe the day together. So I looked in the Yellow Pages. And then I started asking people, "Do you know of anybody?" and someone directed me to this Pentecostal congregation. And so, for Martin Luther King Day we had a celebration together with this congregation. And I spent some time going to the church, meeting the people. We're doing it again this year. And I never would have done that before I had that experience at St. Frances. So I think that I carry this with me in many ways, that I feel as Jews we should be in contact with our African American brothers and sisters, no matter where we live.