In the wake of his father's murder by a white supremacist at the Sikh Temple of Wisconsin, Pardeep Kaleka has become a powerful voice against hate crime and violence. Kaleka helped found the organization Serve 2 Unite, which brings together young people from different religious and cultural backgrounds. 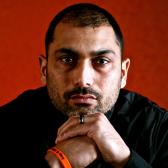 In the wake of his father's murder by a white supremacist at the Sikh Temple of Wisconsin, Pardeep Kaleka has become a powerful voice against hate crime and violence. Kaleka helped found the organization Serve 2 Unite, which brings together young people from different religious and cultural backgrounds.

PARDEEP KALEKA:
My name is Pardeep Kaleka. I'm the oldest son of Satwant Singh Kaleka, who was murdered on August 5, 2012, by a white supremacist at the Sikh Temple of Wisconsin.

ALEISA FISHMAN:
In the wake of his father's death, Pardeep Kaleka has become a powerful voice against hate crime and violence. A former police officer who now teaches high school in urban Milwaukee, Kaleka helped found the organization Serve 2 Unite (external link) which brings together young people from different religious and cultural backgrounds.

Welcome to Voices on Antisemitism, a podcast series from the United States Holocaust Memorial Museum made possible by generous support from the Elizabeth and Oliver Stanton Foundation. I'm Aleisa Fishman. Every month, we invite a guest to reflect about the many ways that antisemitism and hatred influence our world today. From Milwaukee, Wisconsin, here's Pardeep Kaleka.

PARDEEP KALEKA:
Our entire family came to Wisconsin in 1982; we emigrated from India. Typical immigration story, where you come with $35 in your pocket and you work and you work and you work and you work hard, and eventually things turn out for you. Growing up as a Sikh in Milwaukee, it did dawn on us that we were a little bit different. I always knew that my parents dressed a little bit differently than other parents. Quite honestly, at times I was ashamed to be seen with my mom who was wearing the traditional garb, or my dad who was wearing the turban. And at times I just didn't want to have to think about that. I didn't want to have to think about, you know, my skin color. But that being said—now that I'm 36 years old—I appreciate those differences and I kind of value the best of both the worlds.

On August 5, I was driving towards the temple. I was going to drop off my kids to Sunday school. And at the intersection, I get stopped by a squad car. And the squad car…they let us know that there's been a shooting at the temple. And what we found out later was that Dad was inside the temple and he had been shot, and that Mom…my mom was basically hiding in the closet with other females that were working in the kitchen at the time. Six people had been killed. Three others had been shot. One of those would be critically wounded and is still suffering. Six victims, we did lose six, but we could've lost a lot more if not for two youths who were outside when the shooting started. They both ran inside and they warned people, therefore people could find cover.

These two same kids, when the shooting happened, they told me that they spotted my father laying on the ground. And they said that he was praying. He was chanting our prayer that Sikhs chant: "Waheguru, Waheguru, Waheguru," which calls out to the teacher, the guru. And, you know, me and my dad's relationship wasn't always the greatest, but at that time I was more proud of my dad than I've ever been because he wasn't praying for himself. When he said, "Waheguru," he was praying for the world. And that inspired me today to basically keep a lot of this on the forefront, to make people conscious that these problems do exist.

The kind of prejudices Sikhs experience in the United States—I guess you're going to have to look at two time frames on that. Before 9/11, it was more of a curiosity. You know: "How do you guys do this? What kind of food do you eat? Let me try to get to know what you're about." Whereas post-9/11, it started to take sort of a mysterious tone, and quite honestly it took more of a negative tone. Awareness of who Sikhs were was brought to the forefront after August 5. But my basic goal is to not try to decipher Sikhs from Muslims. I think that attack came from just sheer ignorance and hatred. Personally, it was tragic for me. Personally, it was tragic for a lot of people that were close to the situation, but I'm pretty sure that he was targeting Sikhs, Muslims, Blacks, Jews, and would have targeted anybody. To me, he just basically attacked "the other."

And in a way, it kind of opened up our eyes to see that maybe Americans don't know each other as well as we thought we did. And we need to start doing that; we need to start to minimize some of the differences and maximize the similarities.