Nechama Tec believes it's important to examine the Holocaust from many different angles. In her work, she looks at the places where antisemitism and sexism intersect, and at the particular ways in which women endured Nazi persecution. 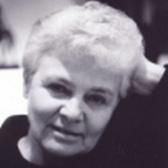 Nechama Tec believes it's important to examine the Holocaust from many different angles. In her work, she looks at the places where antisemitism and sexism intersect, and at the particular ways in which women endured Nazi persecution.

ALEISA FISHMAN:
As a survivor and a sociologist, Nechama Tec believes it's important to examine the Holocaust from many different angles. In her book Resilience and Courage: Women, Men, and the Holocaust, Tec looks at the places where sexism and antisemitism intersect, and at the particular ways in which women endured Nazi persecution.

Welcome to Voices on Antisemitism, a podcast series from the United States Holocaust Memorial Museum made possible by generous support from the Oliver and Elizabeth Stanton Foundation. I'm your host, Aleisa Fishman. Every other week, we invite a guest to reflect about the many ways that antisemitism and hatred influence our world today. Here's sociologist and author, Nechama Tec.

NECHAMA TEC:
I thought it was very important to look at women because I realized that they experienced the Holocaust and reacted to the Holocaust in different ways from men. So I decided I am going to look at women in the forest, the ghettos, the concentration camps, and all these contexts in terms of which we examine the Holocaust—I looked at the women, what happened to them in each.

The German nation was a patriarchal system, like most European countries at that time. So this was true also for the Jewish families, you know, that the man was really in charge. So by the patterns of relationships that they had, the demand was much greater upon women to be flexible—they had to be submissive to the father, then to the husband. That doesn't mean that every woman behaves this way under all circumstances. But the women have a history of accommodation and this history of accommodation creates flexibility.

If we take, for instance, the situation in the ghetto. Much of my evidence comes from direct interviews. What happened to the men that were brought into the ghetto? If they survived, they lost their jobs, they lost their status, they became a nobody. Because in a patriarchal system, the whole selfhood for a man comes from his achievements: can he be a protector of the family? Can he be a supporter of the family? And all this was thrown out. They were humiliated, terribly, on purpose. But the woman's domain—to feed the family—was still there. So therefore a woman, while she lost a lot, it did not destroy her selfhood.

What do we want when we start looking at the Holocaust? We want to learn, to get insights. And the more ways you consider when you examine different groups, the better the outcome, I think. Because one story doesn't give you the answer.