In his 2007 novel The Yiddish Policemen's Union, Michael Chabon tries to imagine a way out of the Holocaust. 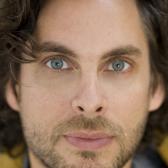 In his 2007 novel The Yiddish Policemen's Union, Michael Chabon tries to imagine a way out of the Holocaust.

MICHAEL CHABON:
One of the clearest, sharpest images that I retain—in a way my only truly firsthand sense of the Holocaust—was an aunt of mine who had been interned as a child had her arm tattooed. So that she had this string of numerals on her forearm and the sight of that, the first time I noticed it, the first time I saw it, just struck me so forcefully. And thereafter, whenever I would see her I would just seek out the sight of that, as if almost to assure myself that I hadn't imagined it the last time. And also because I had this desire, even as a child, to somehow know what it all meant. I don't mean "know" in an intellectual way, but to feel the force, even in this tiny infinitesimal way, to just get some kind of direct, clear sense of what the Holocaust was.

DANIEL GREENE:
When Michael Chabon first found Say It In Yiddish, a phrasebook for travelers published in 1958, he wondered where anyone would find such a book useful. In his 2007 novel, The Yiddish Policemen's Union, Chabon invented just the place—a fictional settlement for displaced European Jews in Alaska. In The Yiddish Policemen's Union, as in so much of Chabon's work, the Holocaust is ever present in the background.

Welcome to Voices on Antisemitism, a free podcast series of the United States Holocaust Memorial Museum made possible by generous support from the Oliver and Elizabeth Stanton Foundation. I'm Daniel Greene. Every other week, we invite a guest to reflect about the many ways that antisemitism and hatred influence our world today. Here's author Michael Chabon.

MICHAEL CHABON:
I think more than anything else the question that I've wrestled with in my own writing in terms of the Holocaust is how much of a right do I have to quote unquote "use" the Holocaust for fictional purposes? You know, is it okay for me to write about the Holocaust, having had no direct personal experience of it whatsoever? To what degree am I entitled to portray or represent it in my work?

Ultimately, I'm trying to tell stories, and it's such an unconscious process of having a kind of image occur to me. Having a sort of wish or a desire or a longing or reading this Yiddish phrase book, Say it in Yiddish: A Phrase Book for Travelers, a Yiddish phrase book for travelers that was published in the late 1950s. And it was the source of inspiration for me to write The Yiddish Policemen's Union, but before that I wrote an essay trying to come to terms with the idea of a phrase book for travelers in Yiddish. Trying to address the question of where would you go with such a book? Where could you take it? To what destination would you travel with a Yiddish phrase book that told you how to do things like order a dental appliance in Yiddish, or something like that?

And in that essay I speculated on the possibility that if the Holocaust had not happened, then all of those unmurdered Jews would have stayed where they were possibly and reproduced, and had grandchildren and great grandchildren. And it's not unreasonable to imagine that a large number of those people would still be Yiddish speakers today. And that if you were traveling through large swaths of what's currently the Ukraine, and Poland, and Russia and so on, that it might be a good thing to have a Yiddish phrase book along.

And just wishing so powerfully that there were such a place that I could go visit. That there was a Yiddish-speaking country right now where I could go and take this phrase book and go to the casino and get my chips in Yiddish.

And once I set myself the task of responding to that wish, and saying, "Okay, I'm going to try to write a novel set in that place so that I can visit it in fiction," I'm just forced instantly as an initial condition of writing this novel to contend with the Holocaust. Because the Holocaust killed Yiddish. And if I want to be writing about Yiddish, a modern-speaking Yiddish state, I have to deal with the Holocaust somehow or other. It's going to be part of the story.

I think in The Yiddish Policemen's Union I tried to use my imagination to undo at least some of the effects of the Holocaust, and to imagine a way out of the catastrophe. And again, I suspect that part of the force that drives that novel is the consciousness that ultimately that's a tragically futile wish.

I think all of us have known that childish wish to have it not be. It's a natural human characteristic to look back on a tragedy and try to find the points at which if only certain things had happened differently it might have been averted.

Or, the cliché fantasy of having a time machine and using it to go back and strangle Adolf Hitler in his cradle.

You know, that sort of metaphysically foolish, but perfectly human, kind of wishing to undo or to somehow avert catastrophe, I think is part of the legacy of my generation following the Holocaust—to have those powerful feelings of wishing it were not so, wishing it could be undone, and trying to understand how it did happen, partly in order to go through that process of wishing it otherwise.