Born in Pakistan and a practicing Muslim, Mehnaz Afridi has studied Judaism and Jewish history, interviewed Holocaust survivors, and visited Dachau to pay respect and pray. Now she works to inspire her students to take interest in other faiths and cultures as well. 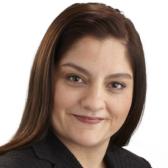 Born in Pakistan and a practicing Muslim, Mehnaz Afridi has studied Judaism and Jewish history, interviewed Holocaust survivors, and visited Dachau to pay respect and pray. Now she works to inspire her students to take interest in other faiths and cultures as well.

MEHNAZ AFRIDI:
I think it's very hard for people to understand that there are Muslims or there are Jews who are interested genuinely in each other's faiths or cultures or each other's sufferings and pains.

ALEISA FISHMAN:
Mehnaz Afridi is a person interested in other faiths and cultures. Born in Pakistan and a practicing Muslim, Afridi has studied Judaism and Jewish history, interviewed Holocaust survivors, and visited Dachau to pay respect and to pray. Now as an assistant professor of religious studies and the director of the Holocaust, Genocide, and Interfaith Center at Manhattan College, she works to inspire her students to take interest in other faiths and cultures as well.

Welcome to Voices on Antisemitism, a podcast series from the United States Holocaust Memorial Museum made possible by generous support from the Elizabeth and Oliver Stanton Foundation. I'm Aleisa Fishman. Every month, we invite a guest to reflect about the many ways that antisemitism and hatred influence our world today. From the campus of Manhattan College in Riverdale, NY, here’s Mehnaz Afridi.

MEHNAZ AFRIDI:
So I saw this posting at Manhattan College and it was perfect. They wanted someone to teach Islam, and they wanted someone who had knowledge of the Holocaust, and they wanted someone with nonprofit experience, which I have, and I applied and I got it. I mean, it was just it was almost tapered towards me. And my appointment was not smooth. It was controversial. And it was controversial for mainly Jews because there's so much mistrust between our communities. And people ask me, "What bothered you the most?" And I said, "One thing that bothered me the most was I read a blog and it said, 'You might as well have hired a neo-Nazi,'" and that just tore my heart apart. You know, because it was almost like, "Oh, my God. You're equating Muslims to neo-Nazis. How sad is that?" And it made me feel like this is more important to me now. I've got to change this, right; I have to change this perspective.

And I'm not Jewish, but I am very aware of problems, and also I feel that through understanding of the Holocaust we can create some more dialogue. And more important dialogue than just, you know, interfaith where we just sit together and talk about how we have commonalities, but really the differences and the sufferings that have been ongoing issues for not just Jews, but also Muslims.

I mean, when I talk about Muslims in America and Islamophobia I can't really talk about it in isolation. I talk about antisemitism and how antisemitism is still a bigger problem in the United States than Islamophobia, and people are shocked when I tell them that's a fact, that's statistical. So it's important for my Muslim students to know that. Simplistically, I think, for students that I've taught about the Holocaust, their "aha" moment is that they had no idea that it was actually six million Jews. That they had no idea that Jews were in camps in places like Morocco, and they had no idea that every Jew was basically picked from the surface of the earth as far as the Nazis and the Vichy government could go. And I think for everybody that should be an "aha" moment. I don't know why it's not. But I think when students really listen and they really understand what's going on, or they know what happened in the death camps, Muslim students, of course, they're absolutely, not even just sympathetic, but they want to, you know, say, "Well, what happened? Why didn't anyone do anything?" just like a Jewish student would say, right?

So, I mean, there's a real ability for young people, if they can understand or have empathy for others outside of their identity, to move forward in a different way. It doesn't mean you lose your faith, it doesn't mean you lose your identity, but to move forward in a very different and unique way where you understand the sensitivities of other religions and cultures.

It sounds silly, but people still don't feel like, you know, the Holocaust is documented enough. It's not just in the Muslim community. It's in the non-Muslim communities, people who try to disprove it. And I just thought to myself, you know, I would like to go and interview Holocaust survivors myself. So I approached the Museum of Tolerance and they were kind enough to introduce me to them and I've interviewed five in Los Angeles. But what was so interesting about these interviews is that they wanted to interview me. They wanted to say, "Wait a second. Why are you doing this? You're a Muslim." And then they also were saying, "Hey, how can you be a Muslim? Don't they oppress you?" So, what was interesting was we started to have a dialogue. And even though they were Holocaust survivors, and, of course, older than me and different generation from different places in Europe, we started to humanize each other in a very unique way where I remember hugging one of them and he said, "Oh, my God. I didn't know Muslim women hug." And I said, "You know, we're not so cold and segregated as you think." And I felt there was a moment where we just looked at each other and he said, "Yeah." And there was a sense of relief from the two of us where we had broken stereotypes in a sense that I didn't even expect this, you know. I really didn't expect this. And he was kind of taken aback. And it was a relief for us. It was like comfort.

In terms of Islamic principles, my ethical responsibility to people, to humanity, as God has commanded, is not to bear false witness, just like Jews and Christians. And just like the Bible states, just like the Torah states. So for me to experience antisemitism in Muslim communities, I do not tolerate. There are many, many people that have expressed antisemitic sentiments around me—and not just Muslims, but non-Jews—that are no longer invited to my dinner table. And it's because I can't tolerate that, just like I wouldn't want to tolerate people being anti-Islamic or anti-Muslim. And I have to take what I have learned from the Koran and implement it in my life. If you just pray five times a day or fast or go to Hajj or give charity, that is actually not Muslim enough. But you must act in the community and in the society.

It's interesting. When you study someone else's religion, you take that seriously, you sort of come back to your own tradition. And I feel that Islam's message is very strongly positive about Jews. And what I want to do is through Islamic principles, try and talk to Muslim communities, about this terrible antisemitism, this terrible take on the Holocaust or any kind of Holocaust denial, because I think that's really one of the ways that we can perhaps create peace. If we understand each other's human history and realities, I think we have a lot more hope.

ALEISA FISHMAN:
Voices on Antisemitism is a podcast series of the United States Holocaust Memorial Museum. Join us every month to hear a new perspective on the continuing threat of antisemitism in our world today. We would appreciate your feedback on this series. Please visit our website at www.ushmm.org.