Born in Iran, Maziar Bahari is a journalist, filmmaker, and human rights activist. He has made two films on the Holocaust: one about the refugees aboard the St. Louis and, most recently, about Iranian diplomat Abdol Hossein Sardari, who saved Jews in occupied France. Bahari was imprisoned by the Iranian government from June to October 2009. 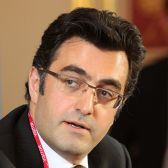 Born in Iran, Maziar Bahari is a journalist, filmmaker, and human rights activist. He has made two films on the Holocaust: one about the refugees aboard the St. Louis and, most recently, about Iranian diplomat Abdol Hossein Sardari, who saved Jews in occupied France. Bahari was imprisoned by the Iranian government from June to October 2009.

ALEISA FISHMAN:
Born in Iran, Maziar Bahari is a journalist, filmmaker, and human rights activist. He has made two films on the Holocaust: one about the refugees aboard the St. Louis and, most recently, about Iranian diplomat Abdol Hossein Sardari, who saved Jews in occupied France. Bahari was imprisoned by the Iranian government from June to October 2009.

Welcome to Voices on Antisemitism, a podcast series from the United States Holocaust Memorial Museum made possible by generous support from the Elizabeth and Oliver Stanton Foundation. I’m Aleisa Fishman. Every month, we invite a guest to reflect about the many ways that antisemitism and hatred influence our world today. From London, here’s Maziar Bahari.

MAZIAR BAHARI:
As far as I know, I’m the only Iranian, or even maybe only Muslim, who has ever made a film about the Holocaust, who sympathizes with the Holocaust. I became interested in the Holocaust since I was a child. We were living in a Jewish neighborhood in Tehran, and one of the main synagogues in Tehran was on our street. There was a kosher butchery. There were many Jewish families on our street. So I was playing with them, and I think it was age maybe seven or eight, I heard the name Jew or Jewish for the first time. And I asked my mother, “What’s Jewish? Who are the Jews?” and she told me that it’s a different religion, and many famous people are Jewish. And I asked her, “Like who?” and she told me, “Like Karl Marx, and Trotsky, and Albert Einstein, Charlie Chaplin.” And so I became really interested in Jewish culture. And then I migrated to Canada in 1988, and at that time, because I was an immigrant, I wanted to do a film about immigration. And I came across the story of the voyage of the St. Louis, which was a ship full of 912 Jewish immigrants who fled from Germany in May 1939. They have temporary visas for the United States in their hands. The landing cards were issued by the Cuban government, but when they got to Cuba, all their visas were annulled because they were sold these visas illegally. And, I thought I found my story. I had to do that story.

I made “The Voyage of the St. Louis” in 1994, and in 2007, there was a retrospective of my films at the Amsterdam Documentary Film Festival. At that time, Ahmadinejad had been the president of Iran for two years, and of course he became famous for denying the Holocaust and promising to wipe Israel off the map. So, in an interview, I said that I insisted to show this film at the festival because I wanted to prove that not all Iranians think like Ahmadinejad, and he’s an idiot. After that, I was in Iran in 2009 to cover the elections for Newsweek and Channel 4 News, and then I was arrested along with hundreds of other Iranians. And my interrogator showed me a transcript of that interview I did with Amsterdam Film Festival and he said, “Well, this shows that you’re a Zionist sympathizer, and you’re going to pay for it.” They put a lot of pressure on me because they wanted me to falsely confess that I had put different members of the Iranian regime, especially the reformers, in touch with foreign intelligence organizations.

Basically I was in prison for 118 days, 107 days in solitary confinement. And solitary confinement is the worst kind of torture because the effect of the psychological torture is within you, and they can even torture you through an email. And they tried to do that with me as well. Eventually, I was bailed out, so I left the country as soon as I could. And still they continued to threaten me by phone calls, by text messages, saying: “Just remember what we told you in prison: “We can always bring you back in a bag.”

I think the best way to combat denial is to just educate people, through Twitter, through Facebook, through doing short videos, through talking to people as well. But also I think it’s very important to make the Holocaust palpable for the new generation. For example, in Iran, this horrifying method of forced confession, it is something that the Iranian government has been doing for the past 37 years. And for many Iranians, if you talk to them about the forced confessions during the Nazi regime, that not only brings home the message of the Holocaust and the fact that it should never happen again, but also it makes them more aware of what is happening in their own country, and that their own government is doing something to their own people that the Nazi regime was doing in the 1930s and early 1940s.