Maya Benton is working to establish the Roman Vishniac Archive at the International Center of Photography. Vishniac's photos include some of the most well-known images of Jewish life in Eastern Europe. The archive also includes thousands of unpublished images that show the tremendous diversity of prewar Jewish life, as well as the rise of Nazi power in Berlin. 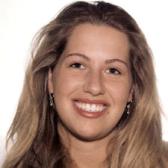 Maya Benton is working to establish the Roman Vishniac Archive at the International Center of Photography. Vishniac's photos include some of the most well-known images of Jewish life in Eastern Europe. The archive also includes thousands of unpublished images that show the tremendous diversity of prewar Jewish life, as well as the rise of Nazi power in Berlin.

ALEISA FISHMAN:
Maya Benton is an art historian and photo curator at the International Center of Photography in New York, where she is working to establish the Roman Vishniac Archive. Roman Vishniac's photos include some of the most well-known images of Jewish life in Eastern Europe. The archive also includes thousands of unpublished images that show the tremendous diversity of prewar Jewish life, as well as the rise of Nazi power in Berlin.

Welcome to Voices on Antisemitism, a podcast series from the United States Holocaust Memorial Museum made possible by generous support from the Elizabeth and Oliver Stanton Foundation. I'm Aleisa Fishman. Every month, we invite a guest to reflect about the many ways that antisemitism and hatred influence our world today. Recorded during a visit to the U.S. Holocaust Memorial Museum, here's Maya Benton.

MAYA BENTON:
So Roman Vishniac is a photographer and also a biologist and a photo microscoper who took the final photographic record of Jewish life in Eastern Europe. His images constitute the most widely reproduced, most widely recognized photos of that now-vanished world

I first heard of Vishniac, two times actually. The first was the ubiquitousness of that book A Vanished World that came out in 1983. I heard from someone that it's the third most-common book in Jewish homes. And I don't remember when we bought it or it was introduced into our home, but I remember seeing it on people's tables and that being the reference point for Jewish life in Eastern Europe.

I was raised in a home where everyone spoke Yiddish, and I'm a first generation American. I felt, I think, a generation behind a lot of my friends, and so I felt much more connected, I think, to that world. But the second more intimate and poignant interaction that I had with Vishniac was when I was 17 and a senior in high school. The book To Give Them Light came out. And I have an incredibly vivid memory of that experience, because people were on the phone in my family shrieking with hysteria and excitement talking to each other about that book. So I heard my mother in her office talking on the phone to a relative in Israel about the book, and I walked in to see what she was talking about and it was opened to a page with a picture of a signpost. And the signpost had various towns on it with, you know: "100 kilometers to Vilna," "60 kilometers to Białystok,” “100 kilometers to Novogrudek." And Novogrudek is the town that my entire family comes from. It's also called Navahrudak. And I remember vividly that excitement about a photo—not of the town, or of a relative, or of a person of the town—but of just the signpost. I remember at the time even thinking it's pretty amazing that a photo of a signpost with the name of a town can mean so much when a whole world has been destroyed. Anything that you can grab on to is so meaningful.

From 1935 to 1938, Vishniac was sent on assignment by the JDC or the Jewish Joint Distribution Committee, which was at the time the world's largest Jewish relief organization. He was asked to document poor Jews who needed help. And so we know what the context of the original work was, that he was sent on assignment. So, if I say to you: "take pictures of poor Jews in Eastern Europe." You're going to probably focus on religious boys and religious men, because they're marked as Jews by their difference, by their payos, or their side locks, and their hats, or their shtreimels, or their long coats. 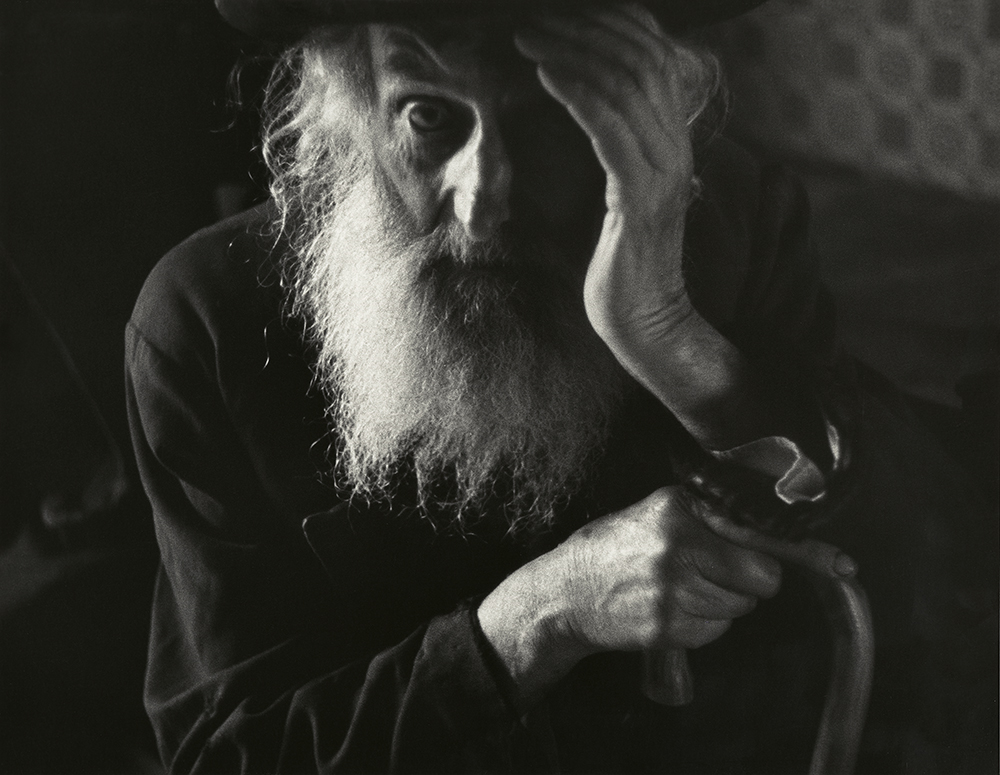 Now, when you look at a picture of a boy in a small town in Eastern Europe from '38, you can't help but think he probably perished in the Holocaust. You can't help but think about Auschwitz. And so those became the iconic images to represent Eastern European Jewish life on the brink of extinction. And yet his unpublished work often focuses on middle-class life, secular life, cosmopolitan and urban life. And you see young beautiful women with lipsticks and berets selling herring and a fish out of a barrel, and remarkable images that never really made it into the canon. And the unpublished work shows middle-class and secular life and,…in a way that really reflects how a lot of American Jews are living today. And you can identify with those images much more easily and you can also identify with that collective past if it's portrayed that way much more easily. 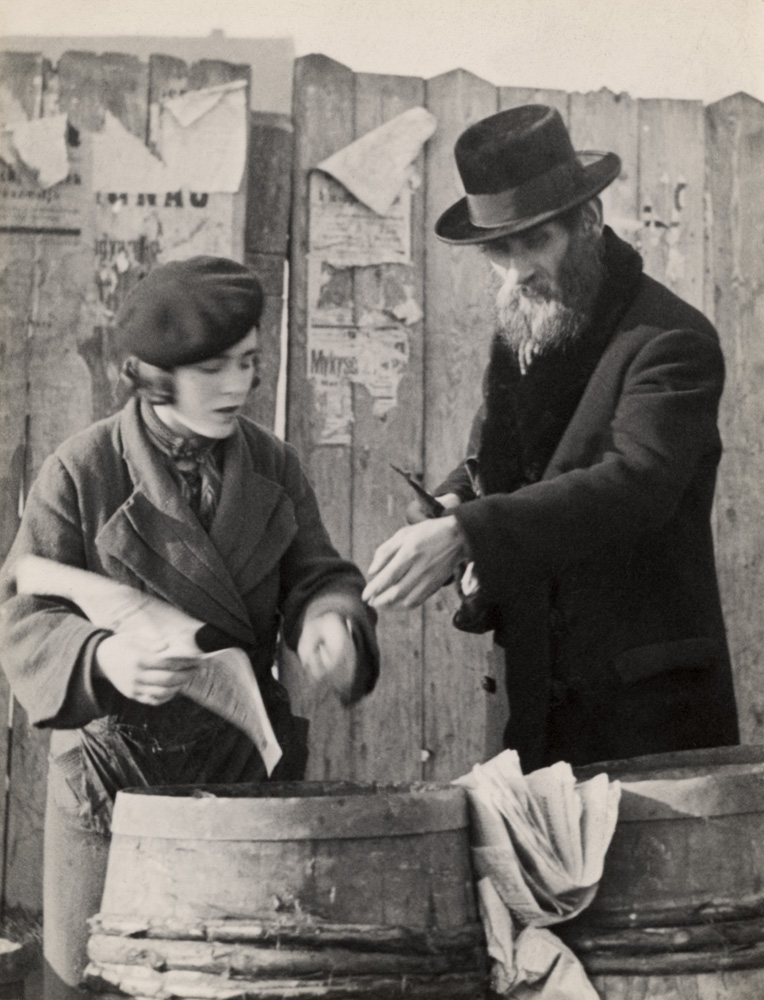 It's amazing to think that as Vishniac was documenting the effects of antisemitic boycotts in Poland, he was also documenting the rise of Nazi power in Berlin—the ominous signs of swastikas that were ubiquitous on the streets in the backdrop of his images. And so you see two radically different experiences, the Polish Jews and their crippling poverty and the antisemitic boycotts closing in on that community, at the same time that the Jewish community in Berlin, that had been tasked with offering relief and providing relief for the Eastern Jews, suffering their own curtailment of civil liberties and persecution. That the German Jews were fine and the Eastern European Jews were in deep trouble after World War I. And you see how quickly both of those things can be transformed. Here was this kind of wealthy, Russian Jew documenting poor Jews in Eastern Europe and suddenly he is in the midst of the walls closing in on him in Berlin and needing to try to find a way out. And how, you know, if you think that you're safe or you're in a community where you have all of your civil liberties and you have freedom and you have choices, how very quickly your neighbors' experiences can become your own. 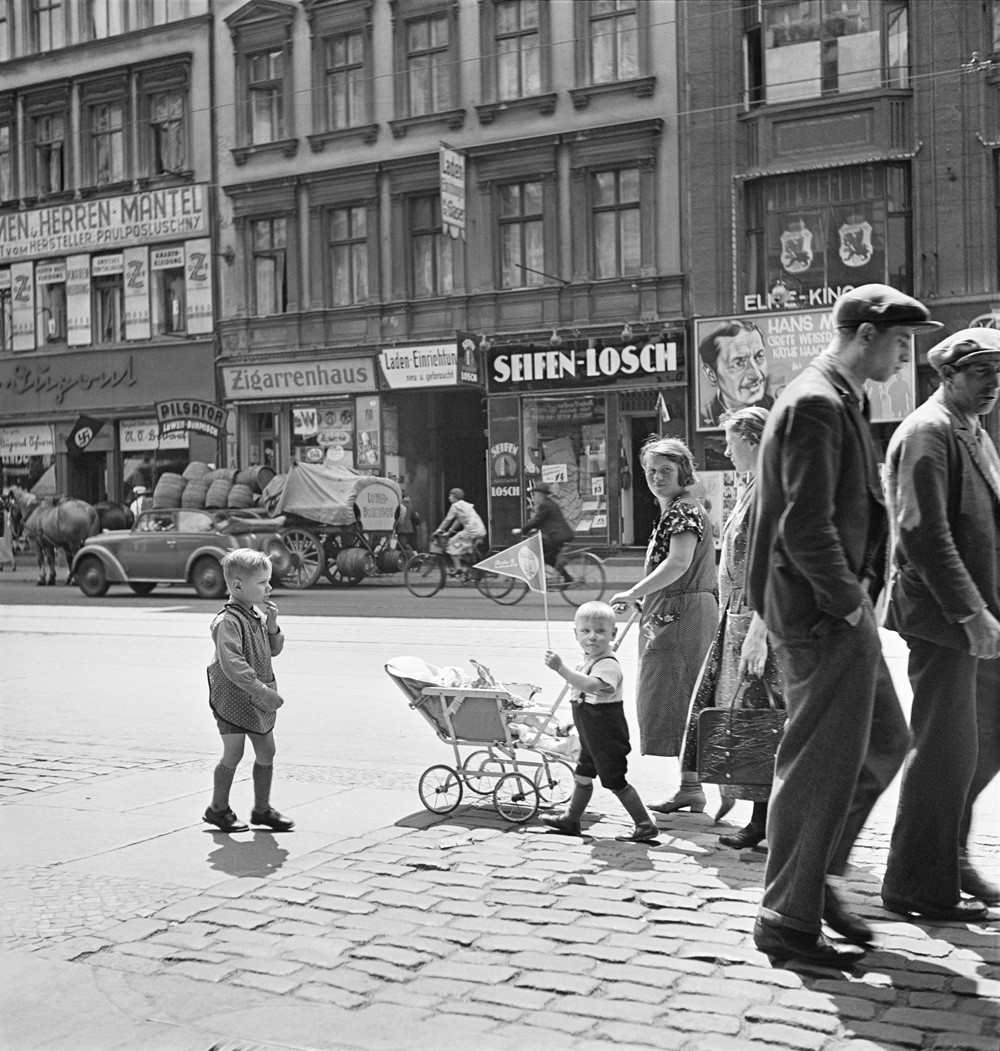