German scholar Matthias Künztel warns that there is a shared totalitarian vision between Nazis and today's radical Islamists. 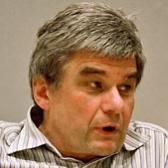 German scholar Matthias Künztel warns that there is a shared totalitarian vision between Nazis and today's radical Islamists.

MATTHIAS KÜNTZEL:
You know, I'm non-Jewish. I'm even non-religious. So I really have no love affair with Israel. And I of course criticize what Israel's government sometimes does.

But I think that the threat of Islamism is comparable to the threat National Socialism posed some decades ago. And it's a threat against the whole Western culture. I would like to defend this culture for the sake of my kids, my own children, against this kind of regressive revolution, against this kind of totalitarianism, which you see today again. And therefore, I have to defend Israel, not for other reasons.

DANIEL GREENE:
In his book Jihad and Jew Hatred, German scholar Matthias Künztel looks at the historical links between fascism and Muslim revolutionary movements. There is a shared totalitarian vision, he says, between Nazis and today's radical Islamists, which poses a threat to Western culture and to democracy.

Welcome to Voices on Antisemitism, a free podcast series of the United States Holocaust Memorial Museum made possible by generous support from the Oliver and Elizabeth Stanton Foundation. I'm Daniel Greene. Every other week, we invite a guest to reflect about the many ways that antisemitism and hatred influence our world today. Here's political scientist, Matthias Künztel.

MATTHIAS KÜNTZEL:
Of course I'm influenced by my own personal history. How could it be that my own father wanted to become an SS man when he was 19 in the year 1944 and wanted to be sent to the Eastern front?

And so of course this influenced me in digging more and try to figure out what is it that makes antisemitism so attractive?

And so I learned that the Nazis—you know, NSDAP means National Socialist German Workers' Party. It was a kind of Socialist movement. They wanted to create a better world. They wanted to create a lasting German peace, but the only condition was get rid of the Jews, because they blamed the Jews for everything evil in the world. And so, this was the way how they could attract so many people.

And that is the same with Islamism today. This is again a revolutionary movement seeking not for a German peace but for Allah's peace all over the world, better conditions for every man and woman. And you just have to get rid of Jews and modernity. Then you will be able to create the lasting peace, peace forever.

So they want to combine anti-imperialist, anti-plutocrat, anti-capitalist movements all over the world because it's, again, the same, a kind of utopia, but we have to get rid of Israel.

And today we have, of course, Muslims who speak out against Islamic antisemitism. They are so much disappointed by Western liberals, because those Western liberals want to do a favor to Muslims by being very polite, and do not contradict, but they do not a favor.

It's a kind of betrayal of the Muslims who think like intellectuals in the Western world tend to think.

You know, racists say, "Every Arab is ugly and I will fight him."

And this kind of anti-racism says, "Every Arab is great, and we will defend him."

You have fascists and you have progressives. You make a difference. But then within the Muslim world it's everything the same.

And this is, in my opinion, also a kind of racism. And I see the Islamists on the offensive in a way. You know, they know what they want. They are smart in their way, very smart, and the West is, you know, like: "Hopefully they won't continue." You know, very, very defensive, very appeasement-like, very Vichy-like. In this way, you never can beat them.