Margit Meissner decided—at the age of 80—that it was time to write a book about her experience as a Holocaust survivor. In the 12 years since, she has shared her story with many visitors to the U.S. Holocaust Memorial Museum, where she now volunteers as a guide. 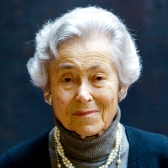 Margit Meissner decided—at the age of 80—that it was time to write a book about her experience as a Holocaust survivor. In the 12 years since, she has shared her story with many visitors to the U.S. Holocaust Memorial Museum, where she now volunteers as a guide.

ALEISA FISHMAN:
After many decades of teaching school children, Margit Meissner decided—at the age of 80—that it was time to write a book about her experience as a Holocaust survivor. In the 12 years since, she has shared her story with many visitors to the U.S. Holocaust Memorial Museum, where she now volunteers as a guide. Ever a teacher, Meissner hosts a ground-breaking texting initiative that encourages young people to engage with Museum exhibits via their cell phones.

Welcome to Voices on Antisemitism, a podcast series from the United States Holocaust Memorial Museum made possible by generous support from the Elizabeth and Oliver Stanton Foundation. I'm Aleisa Fishman. Every month, we invite a guest to reflect about the many ways that antisemitism and hatred influence our world today. Here's Holocaust survivor Margit Meissner.

MARGIT MEISSNER:
I was born in Innsbruck, Austria, as the fourth child and only girl to a rather well-to-do, very assimilated, Jewish family. My family moved to Prague when I was a few months old, so I never really lived in Austria, but I had an Austrian passport. And we had a very formal house, with a butler and maids and a dressmaker and chauffeur. I think I had a very nice childhood.

Austria was annexed in 1938, and my mother thought it wasn't safe for me as an Austrian to say in Prague. She decided with me that I should go to Paris, because it was clear what was happening to the Jews in Germany, that they lost all their belongings. So if we ever had to emigrate, which wasn't clear, we would be poor, and if I was poor I had to make a living, and the way to make a living for me was to become a dressmaker. So she found a French family that was going to take care of me. And I was in the middle of 10th grade and people said to my mother, "You're hysterical. Why do you send this child away?" She, however, didn't change her mind.

When the war started, it very soon became clear that France could not defend itself. And in the end, the day before the Germans entered Paris, I bought myself a bicycle with the money that mother had left me. And I left Paris on a bicycle the day before Germans came in, in a very chaotic fashion. I was scared and I didn't know whether I was doing the right thing. I didn't know where I was going. However, I kept going, going, going and I had with me a little case with a change of underwear, two chocolate croissants, and my dress-making notes. So that's what I took with me.

After the end of the war, I came to Germany with my husband, feeling very conflicted about what I saw in Germany in terms of destruction. I had worked in the Office of War Information during World War II, so I had been always up to date on how the war was going and thrilled that we bombed Dresden to bits and that we destroyed Nuremberg completely. And when I saw it, it wasn't like that at all. It was very disturbing and you could see all these civilians who died and who had nothing to eat. And very difficult for me emotionally to find some kind of balance between these two feelings. And so I felt that I needed to do something meaningful and I got a job with the American Army of Occupation to re-educate German youth.

And German Youth Activities was an Army program run mainly by soldiers. And the soldiers played basketball with the kids and gave them Coke. And I thought that was no reeducation. So I started this—what I thought very sophisticated—democratic educational program and I was immensely unsuccessful. So I had girls who came after school and they came because it was warm, because they had no place to live and they had nothing to eat. So, to come to a warm place was a pleasure. And they started listening to me and they always said, "Yes, ma'am." That's all they said. And then when they got a little bit more confidence, they said, "The only thing that Hitler did wrong was that he lost the war." And that's all that they really knew. These were very ignorant girls to begin with; I mean they were small-town people. And what happened to the Jews was of no consequence to them. And for them, that Hitler lost the war was a catastrophe, because they lost their father and their brother and their livelihood and their houses, and they were trying to survive. And so I came with sophisticated ideas about freedoms and so forth and they sat very quietly and they were not interested. And in the end, when I think it through, maybe the soldiers with basketball and Cokes had a better idea.

So my attempt at re-educating the German youth was very unsuccessful, but I reeducated myself. Because I really began to understand the difference between what it does to people when they grow up in a totalitarian system as opposed to a democratic system. The hatred was part of their mother's milk almost, because every official statement was antisemitic. And I think many people had never met a Jew, but they hated Jews because that was what they were supposed to do. And so it was in France, very antisemitic. It was at that time pervasive wherever I was, and in Germany in a way no more than any place else, just the leadership was different.

ALEISA FISHMAN:
Although Margit feels her experience re-educating Hitler youth was fraught, she has nevertheless dedicated her life to working with children: first as a schoolteacher and now at the Museum.

MARGIT MEISSNER:
I am thrilled to be working with young people, because I can inspire confidence in them in their ability not to stand by. They may not be able to change the world, but when they see injustice in their community and when they see violence and prejudice and antisemitism, there they must involve themselves; they can't just stand by. And they cannot say: "What I do doesn't matter." I think that the motto "What you do matters" is extremely important. So that's why I continue doing this.

ALEISA FISHMAN:
Margit's father died before the war. Her mother and three brothers all survived the Holocaust, although the war separated them geographically: to Spain, Australia, Canada, and the U.S. Margit is looking forward to the upcoming reunion of extended family in Fiji.

Voices on Antisemitism is a podcast series of the United States Holocaust Memorial Museum. Join us every month to hear a new perspective on the continuing threat of antisemitism in our world today. We would appreciate your feedback on this series. Please visit our Web site, www.ushmm.org.