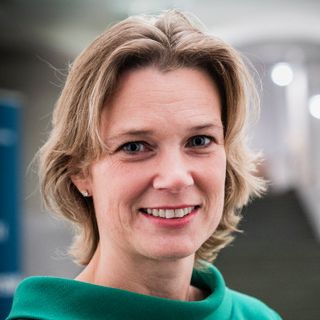 KATHARINA VON SCHNURBEIN:
We have always said that fighting antisemitism is not a responsibility of the Jewish community; it’s a responsibility for society at large. And I think it’s also for that reason it concerns us all and therefore we must stand up against it together.

Welcome to Voices on Antisemitism, a podcast series from the United States Holocaust Memorial Museum made possible by generous support from the Elizabeth and Oliver Stanton Foundation. I’m Aleisa Fishman. Every month, we invite a guest to reflect about the many ways that antisemitism and hatred influence our world today. From Brussels, here’s Katharina von Schnurbein.

KATHARINA VON SCHNURBEIN:
Those who are engaged between cultures, between communities, they usually do not develop this kind of hatred. We financed recently a project by the European Union of Jewish Students that got together with an Armenian organization and a Roma organization; and all three communities have experienced genocide. And all three of them are diaspora here in Europe now. And, so, they exchanged their perceptions and the way they live and also how they can stand up for each other, what kind of projects they could do together. And I think it’s this kind of exchange of reality that can move things forward.

In Vienna, there is an annual conference that brings together Jews and Muslims from across Europe, but also from the Middle East, for a week and then they discuss all issues. They often say, “For the first time, we’ve heard the narrative of the other community.” And suddenly, they understand. And also, they see commonalities, especially I think when there are links to the Middle East or Northern Africa. You know, these communities, they live together next to each other for so many centuries, so there is a lot in common.

Unfortunately, across Europe we see a rise in antisemitism. We see also that Jews in some parts of Europe live in fear and that they even consider leaving Europe for that reason. And I think they have felt for some time left alone. And it was made very clear that there is a political commitment from the side of the European Commission to address these issues and to make sure that Jews can live the lives they want to live in Europe. But because we had these horrific terrorist attacks in the last two years, people simply don’t report the smaller incidents anymore, because they say, “Well, you know, it was only a spit in the face,” or something that is in the end not so horrible if you compare it to the death tolls that we saw. And, so, it’s very difficult at the moment to have clear data, and the recording of antisemitism varies across Europe.

In France alone, on average, two antisemitic acts are reported every day. In 2015, Jews were the target of 40 percent of all racist crimes committed in France. So, if you look just at that one country where we have the largest Jewish community in Europe, it’s very worrying. But it’s not only antisemitism. We are also worried about the rise of hate crime and hate speech with regards to other forms of racism, because after the attacks that happened in Europe in the last two years, violence against Muslims has also spiked. So, it is a very worrying trend.

I’m not Jewish myself; I come from Bavaria in Germany. And I remember when I was a child, we had Israeli friends coming, and my mother put out the Israeli flag. And the next morning we had a big swastika spray-painted in front of our home on the street. And so she called the local authorities and they very quickly removed the swastika in order for this to be remedied before the guests would come.

We have a long-standing history in Europe with regards to antisemitism. So, we know that these things start with hate speech, with incitement, and they can go very, very far. So, I think we have an enormous responsibility to address these issues whenever they occur, and in whichever form they occur.