Political philosopher Jean Bethke Elshtain finds herself increasingly concerned about the use of conspiracy theories to justify, or to disguise, hatred of Jews. 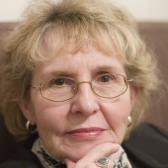 Political philosopher Jean Bethke Elshtain finds herself increasingly concerned about the use of conspiracy theories to justify, or to disguise, hatred of Jews.

JEAN BETHKE ELSHTAIN:
It’s very difficult to argue against conspiracy, because conspiracies are like a psychosis. It’s an entirely closed system which has a relentless internal logic. I mean, the world is a bewildering, dangerous, messy place, and if you think you have got the clue to solve every mystery, and that’s called the Jews, then you just go with it.

DANIEL GREENE:
In her work as a political philosopher, Jean Bethke Elshtain has been guided by difficult questions. Questions like: When can war be considered just? What are the moral responsibilites of political leaders? Is there an ethical response to terrorism?

Today, Elshtain finds herself concerned about arguments used to justify, or to disguise, hatred of Jews.

Welcome to Voices on Antisemitism, a free podcast series of the United States Holocaust Memorial Museum. I'm Daniel Greene. Every other week, we invite a guest to reflect about the many ways that antisemitism and hatred influence our world today. Here's political philosopher Jean Bethke Elshtain.

JEAN BETHKE ELSHTAIN:
The connection between antisemitism and anti-Americanism is very clear. I mean, it’s palpable at this point. And it derives, I think, from a very skewed view of history. That view of history being that, not only has the United States historically been allied with Israel for a whole variety of important reasons, but also the belief that it is somehow some sinister groups inside the United States—variously called “the Jewish Lobby” or some such—who are manipulating American foreign policy, and that everything the United States does is somehow controlled by the State of Israel. Because in America it’s possible for people of Jewish ancestry to enter the corridors of power, that too is seen as part of this vast conspiracy—you know, the Jews sort of moving into control, everything: the media, politics, business, banking, so on and so forth.

Look, if you’re absolutely convinced that everything you do is controlled by a chip implanted in your brain by a Martian, then everything makes sense in light of that chip in your brain planted by the Martian. And, similarly, if you believe that everything in the world that happens is controlled by some Zionist cabal, you can always try to draw some causal connection, however tenuous it may be, and say “No, the Jews are really behind this, you know, and you’re...it’s just folly, it’s just naïve to assume that they’re not.”

So it’s very difficult to penetrate that, and that’s why I think that the role of the media becomes terribly important. It’s most unfortunate that many of these conspiracy theories are now being spread via the Internet, via cable, and somehow that legitimates the conspiracy theory. Before, you know, a person might have been seen as one lonely kind of nutty guy or gal. And now they can say, “No, no. I must be right because look there are all of these other people that agree with me.” And it’s not just that you find on the Internet explicit antisemitic sites that specialize in that, but that you have that message being pushed in a variety of ways through other kinds of conspiracy accounts of international politics and domestic politics.

I’m steadfastly opposed to anything like the thought police marching around, and I have real qualms about hate speech codes because of the ways in which those can be misused. But I still think that a moral...a moral leader is one who would say, you know, “It is simply not—if you’re a member of this community—it is not acceptable to teach or to make pronouncements in a way that represents some ideology of hate.”