Though he left the priesthood more than thirty years ago, James Carroll has continued to wrestle with the Church's two thousand year history of anti-Judaism. 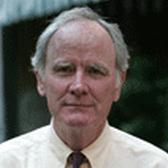 Though he left the priesthood more than thirty years ago, James Carroll has continued to wrestle with the Church's two thousand year history of anti-Judaism.

JAMES CARROLL:
It's urgently important to me that a reformed, self-critical, ecumenical, respectful Christianity dominate the Christian world in the twenty-first century. And the Christian world is at war with itself right now with a contest between the triumphalist, contemptuous, fundamentalism and what might be called an emerging church.

And the cross at Auschwitz is a symbol, really a symbol, a misguided, mistaken, ignorant symbol of the Christianity that needs to be left behind.

DANIEL GREENE:
Though he left the priesthood more than thirty years ago, James Carroll has continued to wrestle with his relationship to the Catholic Church. Carroll's controversial book, Constantine's Sword, is a deeply personal exploration of his love for Christianity as well as his confrontation with the Church's two thousand year history of anti-Judaism. That confrontation came into focus when Carroll first saw the large wooden cross erected by Catholics at the Auschwitz death camp.

Welcome to Voices on Antisemitism, a free podcast series of the United States Holocaust Memorial Museum made possible by generous support by the Oliver and Elizabeth Stanton Foundation. I'm Daniel Greene. Every other week we invite a guest to reflect about the many ways that antisemitism and hatred influence our world today. Here's author, James Carroll.

JAMES CARROLL:
For the first generations of the Christian movement the cross was not an important symbol. On the contrary. The cross was an execution device, pure and simple. It was symbol of shame and disgrace. The cross comes into the Christian imagination with power only with the conversion of Constantine in the early fourth century. He instructed his soldiers to refashion their swords and spears in the form of a cross. And he went into battle behind this symbol. And suddenly the violence of the cross becomes a note of Christian faith. We find in the Gospel a kind of triumphant reversal of the meaning of the cross. Yes, that's true. But then down through the centuries, the cross does become the emblem of Christian triumphalist claims brought against Jews and the Jewish people. Never mind the history, the authentic history, which was that it was a Roman execution device, erected by Romans. Now it's used against the Jews.

The Second Vatican Council was a startling confrontation by the Church's own leadership with the failures of the Church. The most important manifestation of that reckoning was the document Nostra Aetate, issued in 1965—right in the middle of my time in training for the priesthood—which was the revolutionary declaration the Christian people could no longer say that Jesus Christ was murdered by the Jewish people, and went on to say further that Jewish religion continued to have validity. Well, these two notes were a complete overturning of basic affirmations of Catholic and Christian doctrine going back almost to the New Testament period.

But having said that, it's crucial to face the terribly discouraging fact that the average believing Christian in the world today is still liable to believe that "the Jews" murdered Christ, and still liable to believe that Christian truth has replaced Jewish truth. And as evidence of that of course you need to look no further than the phenomenal response to the Mel Gibson film, The Passion of the Christ. Mel Gibson put on vivid display the theology that Nostra Aetate had repudiated. It just goes to show you how deep into the Christian psyche the deicide charge against the Jewish people goes.

The last thing I expected to find when I went to Auschwitz was looming at the wall, Polish Catholics had erected a very large, stout wooden cross. And I associate myself with Jews who find it offensive. For Auschwitz to be in even the most implicit of ways claimed by Christians is something deeply wrong.

The question has to be asked, what is being said about Jesus Christ by having this symbol that we associate with him, this device on which he died? What is it- what is it saying? Jesus of Nazareth at Auschwitz? If he had been at Auschwitz he would have been there simply as a Jew, one of the Jews who died with a number instead of a name.