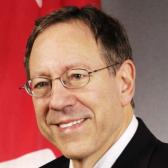 IRWIN COTLER:
The street part of Durban—the marches, the chants—were really reflective and representative of the worst of hate speech. You had things such as: "Too bad that the Holocaust was not completed."

I think those of us who were there felt that it almost amounted to a festival of hate such that we had not experienced anywhere at any time before.

DANIEL GREENE:
Former Canadian Attorney General Irwin Cotler attended the 2001 World Conference Against Racism in Durban, South Africa, with great anticipation and hope. Cotler, who is now a member of the Canadian Parliament, looks back with dismay at the Durban conference, which marked what he calls the "tipping point for a new wave of antisemitism masquerading as anti-racism."

Welcome to Voices on Antisemitism, a free podcast series of the United States Holocaust Memorial Museum made possible by generous support from the Oliver and Elizabeth Stanton Foundation. I'm Daniel Greene. Every other week, we invite a guest to reflect about the many ways that antisemitism and hatred influence our world today. Here's Minister Irwin Cotler.

IRWIN COTLER:
Well, the purpose of the Durban conference was to be a conference against racism. Indeed, it was to be the first international human rights conference of the twenty-first century. And as it was also to be taking place in South Africa, symbolically this offered an opportunity to commemorate the dismantling of apartheid as part of this struggle against racism.

On the way, there were several preparatory regional conferences, the last one of which took place in Tehran. Now that regional conference began with the exclusion of both representatives of the State of Israel or any Jewish NGO [non-governmental organization] from even participating. So you already had signals of what was to come.

Many don't recall what happened at Durban or even know why Durban, for those of us who were there, represented such a watershed in the culture of hate.

Traditional antisemitism involved the discrimination against and denial of the rights of Jews as a minority in whatever host society to live as equal members of that host society.

The new antisemitism is a discrimination against and denial of the right of Israel and the Jewish people to live as an equal member of the family of nations.

What Durban symbolizes is the dangers of what I would call a state-sanctioned culture of hate. That, to me, is the most dangerous form of antisemitism that we are witnessing in the twenty-first century.

If one were to look at the enduring lesson of the Holocaust or the genocides from Srebrenica to Rwanda, one would find that the genocides occurred not because of the machinery of death, but because of this state-sanctioned teaching of contempt and demonizing of the other.

As the Supreme Court of Canada put it, the Holocaust did not begin in the gas chambers. It began with words.

I happen to be a strong proponent of freedom of expression. I had my legal education at Yale Law School in the United States, which is a bastion of free speech. And I take the view, as I learned then, that freedom of speech is the lifeblood of democracy. But both domestic and international law prohibit incitement to violence, let alone incitement to genocide.

And in a country like Canada, we have laws to prohibit the willful promotion of hatred and contempt against an identifiable group in a public place. That belongs to the genre of unprotected speech, because this is not really protected speech in the sense that it constitutes an assault on the very values that underlie free speech—the search for truth, the democratic marketplace of ideas, the autonomy and integrity of the individual.

I think one of the problems we have today is that we have been indulging this type of antisemitic hate discourse for far too long. And I also believe that we can create a critical mass of advocacy to combat it and ultimately prevail.