In 2004, Father Patrick Desbois set out across Ukraine to locate the sites of mass killings of Jews during the Holocaust. He is motivated in part by the memory of his own grandfather, a French soldier who was deported to Ukraine by the Nazis. 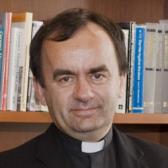 In 2004, Father Patrick Desbois set out across Ukraine to locate the sites of mass killings of Jews during the Holocaust. He is motivated in part by the memory of his own grandfather, a French soldier who was deported to Ukraine by the Nazis.

FATHER PATRICK DESBOIS:
We cannot let our ancestors be unburied like animals. It's a question of dignity, a question of justice. Jews are first of all human beings. And they are unburied in places which is in the middle of Europe. So the first thing is a duty to these people. Otherwise, how will we face to these people in heaven to say, "We didn't take care of you?"

DANIEL GREENE:
When Nazis invaded the Soviet Union in 1941, mobile killing units, known as Einsatzgruppen, began moving from town to town, rounding up Jews for extermination. Typically, victims would be forced to dig their own mass graves. They were murdered with a single shot, and those who did not die right away were buried alive. Approximately one and a half million Jews were killed this way. Their graves were never marked.

In 2004, Father Patrick Desbois set out to locate the estimated 2,500 killing sites across the Ukraine. Traveling with interpreters, photographers, and a ballistic expert, Desbois seeks living witnesses to these crimes. He is motivated in part by the memory of his own grandfather, a French soldier who was deported to the Ukraine by the Nazis.

Welcome to Voices on Antisemitism, a free podcast series of the United States Holocaust Memorial Museum. I'm Daniel Greene. Every other week, we invite a guest to reflect about the many ways that antisemitism and hatred influence our world today. Here's President of Yahad-In Unum, Father Patrick Desbois.

FATHER PATRICK DESBOIS:
I estimate the number of mass grave in Ukraine at minimum 2,500. We have found already 800 witnesses who were present at the executions, where they are children, they were between 6 and 16. And they were recruited in the morning by example to carry the Jews from the village to the mass grave. Or to take the teeth, the gold teeth before the killing, etcetera. Of course, now most of them are not alive but I find at least minimum one or two per mass grave.

And these people want absolutely to speak before to die. They don't understand why nobody came to answer them anything. Very frequently I ask to them, "Did anybody came?"

"Because you are here. You ask to us."

For them it's like a deposition. They are poor people, and they feel, I would say, fraternity with these Jews who have been killed in their village long time ago. And still sixty years after are not buried.

Very frequently they tell us when we leave, "Promise us, Father, that you will work to build a memorial for these people."

You must know also that the mass graves are opened by the smugglers who are looking for gold. It's really an awful spectacle. So in my way it's not acceptable that we build a modern world, we speak of Holocaust all over the world, but we don't bury the victims.

We have a small team. It's half Ukrainian, half French. And when you arrive in the village the first old person we meet we ask her, "Were you here during the war?"

And after, most of the time this person she will bring us to a friend of her [who] was present at execution. Otherwise we go to see the priest, and the priest calls in the parish and ask, "Who was present at the execution?"

Otherwise we go to the main shop and sometime we pass three hours in the shop. And we wait for the old people to come to buy food. And slowly by slowly we find a witness. If we don't find the truth in one day, we come back. Sometime we arrive in a village, and they say, "We are very sorry. The mommy who knew everything, she died last month." So we are one month late. So, and of course it's more and more frequent. So we want absolutely to finish and to run until the witnesses are alive, because one day or another there will be no witnesses anymore.

Our motivation first is to establish the facts. Nobody knows how these people have been killed, and nobody knows where the corpses are. So it means that they have been completely thrown outside of humanity.

One day I had the intuition that the Nazis forgot their cartridge. So we tried on the mass grave, and on this mass grave we found 5,700 cartridge, German cartridge. Each cartridge has its date and the brand of fabrication. There was no Soviet cartridge, so it was clear, it was not a battle. They were killing other people who have no gun. So the cartridge are one of the main proof, because we have to establish a proof of this genocide village after village. It's not a camp, it's a continent.

You know, it's a huge crime. And imagine if we—in the actual context with [Iranian President Mahmoud] Ahmadinejad who is speaking all over the world that there is no proof. So you must imagine that in our continent, sooner or late, people...I would not say that they think that [the] Holocaust did not exist, but they begin to think, perhaps Jews exaggerate. Perhaps it's an exaggeration of the Jewish people. So my job also is to establish definitively the proof so that nobody can discuss and say, "It didn't happen."