Colonel Edward Westermann believes it's important to prepare his cadets to confront morally complicated situations. In a seminar he taught on the Holocaust, Westermann called upon his students to consider carefully the responsibilities of their post. 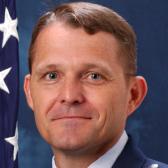 Colonel Edward Westermann believes it's important to prepare his cadets to confront morally complicated situations. In a seminar he taught on the Holocaust, Westermann called upon his students to consider carefully the responsibilities of their post.

EDWARD WESTERMANN:
For someone who is on a patrol in Iraq, every day they're forced to make choices and those choices that they make have to be based on what they feel is legal, what is moral, so that unit camaraderie and unit cohesion do not outweigh moral and ethical responsibilities.

ALEISA FISHMAN:
As Commander of Basic Training at Lackland Air Force Base in Texas, Colonel Edward Westermann believes it's important to prepare his cadets to confront morally complicated situations. Westermann has drawn many lessons for his own life in military service from his studies of the Holocaust. In a seminar he taught on the Holocaust for Air Force Academy cadets, Westermann called upon his students to consider carefully the responsibilities of their post.

Welcome to Voices on Antisemitism, a podcast series from the United States Holocaust Memorial Museum made possible by generous support from the Oliver and Elizabeth Stanton Foundation. I'm your host, Aleisa Fishman. Every other week, we invite a guest to reflect about the many ways that antisemitism and hatred influence our world today. From San Antonio, Texas, here's Colonel Edward Westermann.

EDWARD WESTERMANN:
I became interested in studying the Holocaust after I left Germany, after a flying assignment with the German Air Force. Later on, I went to the Air Force Academy to teach the Holocaust course, because when we wear a uniform we have a special commitment, special bond of trust, and a special responsibility to protecting our nation and to protecting our population. And what the Holocaust shows is that individuals who wear that uniform—in this case, the German Army—had that same bond. However, in some way that bond was then corrupted. And it's an object lesson in my mind for military professionals as to what can happen when one starts down that path.

One of the mechanisms that we used in the class was role-playing essays. And, for example, one of the role-playing exercises asked the students to write a paper from the perspective of a German policeman who was stationed in Poland and receives orders that they're going to a local village, with the understanding that the actions in the village will involve essentially mass murder. And the question to the students is what are their available options and how can they deal with those options. So, the idea that these students are aware that the Holocaust itself offers a touchstone for them to draw parallels between current environments—in Afghanistan or in Iraq, or anywhere in the world—where we have military members involved in dealing with situations that aren't always black and white.

We have a process, every organization has a process of socializing individuals into its organization—whether it's IBM or the military. What for me is important is understanding that those processes can be a very positive thing for creating identity and for creating shared purpose. However, the study of the Holocaust also demonstrates that those very same processes can be perverted and used to change an organization and drive it in a different direction as well. The U.S. military, if we talk about My Lai, if we talk about cases where people have chosen to value group camaraderie over their ethical and moral responsibilities—these are snap decisions. But what looking at the Holocaust allows individuals to do is if you first face that question in the moment when you're standing on a street in Baghdad or when you're standing on a street in Kabul, that if that's the first time you asked yourself the question about "What are my ethical and moral responsibilities in morally ambiguous situations where I have to react?" that you're asking the question too late.

It's a very difficult subject to teach. And it is a case where we are asking a very high level of judgment on the part of individuals, but in point of fact, as a military we give a great deal of responsibility to young men and women, to where we have to have pretty high expectations in their ability to deal with those kinds of situations.

To be a Catholic who's looking at the Holocaust I think is also important, because this is an issue that is bigger than one faith. It certainly impacts the members of the Jewish faith in a very real and personal way. But I think the Holocaust, what it shows us is also that it's bigger than a single faith, because we all stood on those ramps at Auschwitz in one way or another. By my study of the Holocaust, it informs the way that I see situations around me. It informs the way that I interpret situations around me. And I think that in that respect, there's value.