Diana Dumitru found an incredible example of how antisemitism can be dismantled: two territories in Eastern Europe, separated only by a river, shared a legacy of pogroms and violence against Jews. But after WWI, one territory continued a policy of state-sponsored antisemitism, while the other began a policy of integration and acceptance. 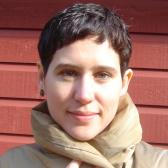 Diana Dumitru found an incredible example of how antisemitism can be dismantled: two territories in Eastern Europe, separated only by a river, shared a legacy of pogroms and violence against Jews. But after WWI, one territory continued a policy of state-sponsored antisemitism, while the other began a policy of integration and acceptance.

DIANA DUMITRU:
This study that I am presenting shows that antisemitism can be constructed, and it is constructed. But also it could be dismantled.

ALEISA FISHMAN:
Diana Dumitru found an incredible example of how antisemitism can be dismantled: two territories in Eastern Europe, separated only by a river, shared a legacy of pogroms and violence against Jews. But after WWI, one territory continued a policy of state-sponsored antisemitism, while the other began a policy of integration and acceptance. Dumitru believes these efforts had enormous effect on people's behavior toward when the Holocaust occurred two decades later.

Welcome to Voices on Antisemitism, a podcast series from the United States Holocaust Memorial Museum made possible by generous support from the Elizabeth and Oliver Stanton Foundation. I'm Aleisa Fishman. Every month, we invite a guest to reflect about the many ways that antisemitism and hatred influence our world today. Recorded in Moscow, here's Holocaust historian Diana Dumitru.

DIANA DUMITRU:
I did a study of why some people harmed and others helped Jews during the Holocaust in Romania. It's basically a comparative study of the attitudes towards Jews in two neighboring territories, which is Bessarabia and Transnistria. So, both of these territories were under Romanian administration during 1941–1944. In Bessarabia, I found evidence and testimonies about a number of violent assaults on Jewish civilians from Bessarabian civilians. Basically, their neighbors were attacking them in a number of villages. For example, one of the most horrendous cases happened in Pepeni. And there, over two hundred Jewish inhabitants were killed with different agricultural tools, with hoes and with bats, by groups of locals and, just like, two Romanian gendarmes. In Transnistria, attitudes were better toward Jews. I could not find a single case of a mass violent attack on Jewish civilians from the local civilian population in Transnistria. I'm not trying to say that there people were not involved in violence, but these were either policemen or German police. But otherwise, the local Gentile population did not involve itself in violence in Transnistria. So, I wanted to find an explanation for myself, why there is this difference?

These territories have a very interesting history, because they were part of the Tsarist Empire. So, in this sense everything is quite comparable before 1918 in Transnistria and Bessarabia. But then, during the interwar years Bessarabia was inside of Romania and the other one was inside of Soviet Union, and in 1941–1944 Romania was a Nazi ally and they had both of these territories under their control.

So, in Soviet Union in the interwar years, they were really trying hard to integrate Jewish population and really trying to fight against antisemitism. The Soviet state was trying to bring home the message to its Gentile population that it's not allowed to attack Jews either verbally or physically. And you know that the Soviet Union was very skilled in using propaganda; even like working with children, making children's books about the friendship between Jewish children and Gentile children.

And it was quite different in Romania. The administration of the state started a very strong campaign against ethnic minorities and Jews especially. And public discourse, official discourse, intellectual discourse was also suffused with antisemitism. So basically everything that was happening inside Romania was training even more the local population in antisemitism.

And I think these are two factors that we should take into account when trying to explain why in 1941, when the Soviet state withdrew from this territory, why local Gentiles from Transnistria were not prepared to attack Jewish neighbors, and meanwhile the local Gentiles in Bessarabia were actually prepared, and they did attack the Jewish population.

There is a good story here, which basically proves the point that when a state and its government is committed to change hostilities among its populations, the state has very good and powerful tools to solve this problem. Even such entrenched hostilities as antisemitism can be somehow transformed in a positive way. During one generation—because the interwar period was like twenty-something years—you really can change people's minds. Not everybody's, not totally, but at least you have a new generation that starts thinking and perceiving a certain group with different eyes. So in a way it is possible in a relatively short timespan to absorb new values, new ideas, and learn even a different kind of behavior. But also the state could and should use all the mechanisms it has to educate better its population and to stimulate good relationships between social groups or national groups or whatever minority groups.