Dervis Hizarci believes that openness to dialogue is key to his work as an educator. First at the Jewish Museum Berlin and now with KIgA, the Kreuzberger Initiative against Antisemitism, Hizarci works to confront hatred and ignorance, which can breed radicalism and violence. 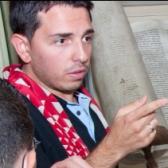 Dervis Hizarci believes that openness to dialogue is key to his work as an educator. First at the Jewish Museum Berlin and now with KIgA, the Kreuzberger Initiative against Antisemitism, Hizarci works to confront hatred and ignorance, which can breed radicalism and violence.

DERVIS HIZARCI:
This must not be the point, that I am Muslim or that I have a Turkish background, but that I’m open, that I try to show empathy.

ALEISA FISHMAN:
Dervis Hizarci believes that openness to dialogue is key to his work as an educator. First at the Jewish Museum Berlin and now with KIgA, the Kreuzberger Initiative against Antisemitism, Hizarci works to confront hatred and ignorance, which can breed radicalism and violence.

Welcome to Voices on Antisemitism, a podcast series from the United States Holocaust Memorial Museum made possible by generous support from the Elizabeth and Oliver Stanton Foundation. I’m Aleisa Fishman. Every month, we invite a guest to reflect about the many ways that antisemitism and hatred influence our world today. From Berlin, here’s Dervis Hizarci.

DERVIS HIZARCI:
KIgA was founded in 2004 with a group of people who just said we must get active against antisemitism here in Berlin, here in this neighborhood, after the bad happenings in Istanbul when the synagogue in Istanbul was bombed in 2003, I think it was. Generally, we are fighting against prejudices and especially antisemitism and Islamophobia. We are working with school classes, but we are also offering our programs to police or unions or even vestrymen. So our target groups are as diverse as this society is or as our team is.

I’m a native Berliner. I was born in Berlin and grew up here, but to me it was always very clear that I have a hybrid identity. And I think just the fact that in front of a class, which is very mixed, that there is a guy with comparable background  could be accepted more easily as a role model or as an educator or as a person whom they’re open to talk with. But the key point to me is taking people seriously. So it makes no difference if they are young Turks or young Germans. If you take them seriously, then they are open and you can work with them even on difficult and complex or challenging issues.

I mean, if we would ask them about these topics and they would tell us that there was no Holocaust or the numbers weren’t so big or whatever, and we would judge them for that, then we wouldn’t make any developments. We wouldn’t change anything. But this is not our goal. Our goal is to bring them to a point where they start questioning themselves. And you can just achieve this when you take them from that point where they are and bring them to your side.

I believe there are connections between all kinds of hatreds, because I see this as a kind of devil’s circle—hate produces more hate. In times where things happen in the world, such as happened right now in Paris, the interest in dealing with these topics is rising. I think it’s no question to condemn all kinds of hate and discrimination and terrorism. We can say this very clearly. But we have to realize that the radicalization of these people who are able to kill people took place in Europe, not in Saudi Arabia or in Afghanistan or Iran or wherever. Their radicalization took place here. So, we have to work here. And this is one of the approaches of KIgA, so that we can do a lot of things in a preventive way.