As frontman for the multi-platinum hard-rock band Disturbed, David Draiman writes songs that are often personal and political. As a kid, he was drawn into occasional fistfights over anti-Jewish remarks. As an adult, he addresses Holocaust denial and antisemitism in his song "Never Again." 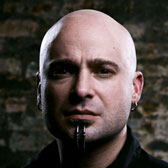 As frontman for the multi-platinum hard-rock band Disturbed, David Draiman writes songs that are often personal and political. As a kid, he was drawn into occasional fistfights over anti-Jewish remarks. As an adult, he addresses Holocaust denial and antisemitism in his song "Never Again."

DAVID DRAIMAN:
I was hoping that for some of our fans that may only read about the Holocaust or may dismiss it somehow, if they realize that it happened to my family, then it becomes more than just a story.

ALEISA FISHMAN:
It's the rare heavy-metal singer who has rabbinical studies in his background, but that's the story of David Draiman. As frontman for the multi-platinum hard-rock band Disturbed, Draiman writes songs that are often personal and political. As a kid, he was drawn into occasional fistfights over anti-Jewish remarks. As an adult, he addresses Holocaust denial and antisemitism in his song "Never Again."

Welcome to Voices on Antisemitism, a podcast series from the United States Holocaust Memorial Museum made possible by generous support from the Elizabeth and Oliver Stanton Foundation. I'm Aleisa Fishman. Every month, we invite a guest to reflect about the many ways that antisemitism and hatred influence our world today. From his home in Austin, Texas, here's musician David Draiman.

Unfortunately there are certain factions that feel that aggressive music in general is an excuse for people to bash their heads in the walls. But there are plenty of bands who really wear their heart on their sleeve, whether you're a band like us or a band like Metallica or a band like Korn. Even though the style is aggressive, you're writing about subject matter that's very, very close to your person and you're writing about subject matter that isn't flighty.

You take a song like, for instance, "Never Again." For people who really understand what that means and who just finished watching something on Discovery Channel where, you know, [Iranian President] Ahmadinejad is touring with two top scholars who decide to go ahead and back his theory that the Holocaust was fabricated; and that pisses you off, and you listen to a song like this, and it vents your anger and puts it into context. You know, sometimes lighter music just isn't appropriate for what you're feeling.

Both of my grandparents on my mother's side of the family are survivors of the camps. My grandfather was on wheelbarrow duty in Bergen-Belsen. It was his job to cart bodies to the crematorium. My grandmother was a little girl in Auschwitz. She survived being in line to the gas chamber on three separate occasions. Since she was a little girl, they let her crawl underneath their legs to the back of the line on three separate times, and after the third time the camp was liberated. And you just see everything that's happening in the media, you see people like Ahmadinejad who are out there trying to stir up a campaign of Jewish conspiracy. And I look at my grandmother, who still has the tattoo on her left forearm, and I realize that an entire generation, the last generation of people who are living who can say "This actually happened to me," are about to be lost to us. And I just wanted to do something that let it be known that this is something that was real, something that happened, and it not only affected the Jewish people, it affected many people, but it's certainly something that shouldn't be forgotten.

You dare to tell me that there never was a Holocaust
You think that history will leave their memory lost
Another Hitler, using fear to control
You're going to fail this time, for the world to see

All that I have left inside
Is a soul that's filled with pride
I tell you "never again!"
Their depraved society
Didn't end up killing me
Scream with me "never again!"
Not again

The fans have been very receptive to it and very embracing of it. I'm certainly proud of what it says and certainly proud of what it's done. I wish it could have done more. I actually offered it up, believe it or not; I called up some Jewish organizations and I'm like, "Hey, you want it? Here. You can have it. I won't even charge you for it. Use it, as like a rallying cry or whatever." No, nobody wanted to use it. So I'm like, "Okay, well…I'll just hold onto it then."

My father's side of the family are Gerrer Hasidic Jews. The person that they say I get my voice from was my great-grandfather who was the head cantor of the Gerrer Hasidische bes medresh in Jerusalem. I basically spent 17 years studying the Talmud and the Tanach, and Judaism in general, and was probably about, I would say, two or three years away from smicha, from being ordained.

DAVID DRAIMAN:
For the countless souls who've died
Let our voices fill this night
Sing with me "never again!"
Oh they aren't lost you see
For the truth will live in me
Believe me "never again!"