In Plantations and Death Camps: Religion, Ideology, and Human Dignity, Beverly Mitchell looks at the history both of the Holocaust and of slavery in the U.S. to see what lessons about human dignity can be learned. 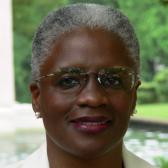 In Plantations and Death Camps: Religion, Ideology, and Human Dignity, Beverly Mitchell looks at the history both of the Holocaust and of slavery in the U.S. to see what lessons about human dignity can be learned.

ALEISA FISHMAN:
Beverly Mitchell is a professor of historical theology at Wesley Theological Seminary in Washington, D.C. In her book, Plantations and Death Camps: Religion, Ideology, and Human Dignity, Mitchell looks at the history of the Holocaust and of slavery in the United States to see what lessons about human dignity can be learned.

Welcome to Voices on Antisemitism, a podcast series from the United States Holocaust Memorial Museum made possible by generous support from the Oliver and Elizabeth Stanton Foundation. I'm your host, Aleisa Fishman. Every other week, we invite a guest to reflect about the many ways that antisemitism and hatred influence our world today. Here’s professor and theologian, Beverly Mitchell.

BEVERLY MITCHELL:
Obviously in terms of my heritage as an African American, slavery and its aftermath is something that I live with constantly, that I'm interested in. But it was actually in my work on Black abolitionism that I came to zero in on this issue of human dignity. I found as I read and studied narratives of Black abolitionists that in their struggle to end slavery, what was even more important for them than ending human bondage—as important as that was—was that they wanted to restore a sense that African Americans were made in the image of God. And that was so crucial to them that it got me to thinking about other peoples who have experienced oppression, who have been abused, who've been victims of genocide. And that led me to explore the plight of the European Jews in the 1930s.

I was always interested in that history, even though it wasn't my history per se. The Holocaust is a lesson for each and every community. And so I used the slave narratives and Holocaust survivor narratives to get the voices to come out and tell the story and identify similarities in terms of their experience. In no way did I want to suggest that their plights were precisely the same—very different centuries, contexts, et cetera—but there were some key elements there that are worth listening to and thinking about in terms of understanding human beings who are struggling for justice.

Plantations and Death Camps, I chose after giving a lot of consideration to what I wanted to call this study. And I chose that as the main title in order to locate the context in which I would talk about human dignity. It's very hard to conceive of dignity, in that context, but we must go there and not to the place where we think of humanity in its glory, at its best. It has to be affirmed at its worst. And I found that it was in the context in which human beings are found in a situation where they are humiliated and degraded that that is where dignity most shines because it works as a protest against their humiliation and mistreatment.

There's the notion of being inextricably bound, a term that Martin Luther King used to describe our connection to one another. That despite whatever differences there are between us, we are in this life together. We're related in some profound way. And what happens to you has an impact on what happens to me.